ASX:CGB) wishes to update our shareholders on the operations of its 55% owned subsidiary Cann Global Asia Pty Ltd, and its activities in Laos PDR. As previously advised in our last quarterly report, as part of the subcontracting agreement with SUN, CGA's cultivation team was due to arrive in Laos on 1st April 2020 to work on the projects. Due to the Covid-19 pandemic, the Laos border was closed on 30th March 2020 which stopped CGA's staff entering the country.

During this time, CGA and Sun had been discussing the possibility of using more of Sun's staff as a temporary measure to undertake the tasks on the pilot cultivation and hemp seeds trial projects. CGA and Sun had been negotiating the costs for temporarily contracting SUN's staff, and were looking into the details of a production plan and a lease agreement for the new projects.

Due to what CGA felt were unreasonable and uncommercial demands for money by SUN, outside the terms of the agreement, CGA decided not to go ahead with the negotiations and to wait until the borders reopen to send their own staff as per the original agreements. Following this decision, SUN made further claims for money which CGA believed to be outside the terms of the service agreements.

CGA has notified SUN that it considers its actions to be in breach of the terms of the agreements and that this conduct was not conducive for CGA to continue utilising their services.

The total remaining value to SUN from CGA of the SUN contracts for their entire term was less than $60,000, of which CGA has already paid a deposit of over $30,000.

CGA have now become aware that SUN have filed a claim with the Centre of Economic Dispute Resolution in LAOS against CGA for USD$6.1 M. CGA view the claim to be vexatious and baseless. CGA does not consider that any money is owing to SUN at all under the arrangements and CGA is currently procuring confirmatory legal advice to that effect.

In an apparent breach of LAO PDR law surrounding the confidentiality of any claims filed with the Centre of Economic Dispute Resolution in Laos (CEDR), CGB has become aware that SUN or parties associated with SUN has been sending selected details of these claims to third parties and CGA's legal representatives have reported this matter to CEDR.

It should be noted that CGB itself is not a party to the contracts between CGA and SUN, nor has CGB provided any guarantees or undertakings in respect of CGA's obligations under the arrangements.

Due to the reasons stated above, CGB does not believe that this claim is material to shareholders or to the market. Notwithstanding this, given the size of the sums being claimed and the apparent attempts by the claimant to publicise them, CGB considers it is appropriate to provide this information to address any misinformation and associated speculation.

CGA has engaged the services of an appropriately credentialled legal firm in Laos who have the expertise to handle this on CGA's behalf and intends to defend the claim made by SUN.

CGB wishes to reassure its shareholders that CGA is following the appropriate lawful procedures to defend any claim against CGA and CGB itself does not anticipate any liability exposures in this matter.

CGA has been in discussions with alternate contractors in Laos to progress the Laos project, and are pleased to report that a new cultivation agreement has been entered into with AA Bio Co Ltd. AABio is a company incorporated in Thailand.

We envisage little to no impact to the hemp cultivation CGB and its partners are planning in Asia as a result of the dispute with SUN, as CGB has now secured access to a separate contracting agreement with AA Bio Co Ltd ('AA Bio'). As a result, CGB believes that its new contract agreement with AA Bio will bring revenue to the company under a new business model faster than under the previous business model under the CGA contract with SUN.

As part of its arrangements with AA Bio, CGB group entities will provide an extraction plant to provide extraction services to Thai cultivators. Thailand has a well-developed and proven agricultural capability, and is likely to become one of the World's leading producers of high-quality CBD hemp products. The Thailand CBD Hemp operations will form part of an official R&D program at the Uttaradit Rajabaht University, Phrae Campus.

The hemp research and development program has been approved and signed by the Dean of the University. The Deputy Head of the FDA in Thailand has confirmed that the crude CBD oil produced under the R&D program can be legally sold and exported. The project will use some of the crude oil to produce a full spectrum tincture for La Vie in Hemp and is in discussion with different companies in the United States to establish some offtake agreements.

As part of the R&D program, the CGB group will also be focusing on the development and sale of auto-flowering raw CBD hemp seeds in anticipation of a large niche market for auto-flowering seeds which is developing in Asia where warmer growing conditions allow for the outdoor cultivation of CBD hemp in the off season. This also includes the development of boutique strains for the international medical cannabis market.

An initial CBD seed Purchase Order has been secured from Naga Organics LLC (USA) for a total value of USD$750,000. Some of the CBD seeds harvested under the R&D program will be used to fulfill this purchase order.

The involvement of Government officials gives CGB and its subsidiaries a lot more confidence in the projects and that no issues similar to the one we are experiencing with SUN will arise.

CGB's Managing Director Sholom Feldman says: "Although we were unhappy to hear about the conduct of SUN which has not enabled CGA to move forward with them at this time, we are quite pleased to have been able to come to a better commercial arrangement with AA Bio. We look forward to the successful partnership with AA Bio and we will keep the market updated of the progress of this project." 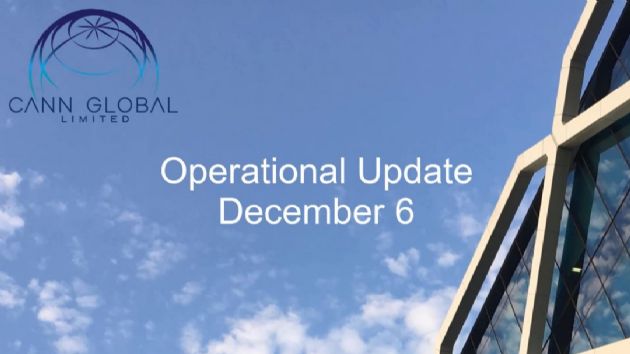