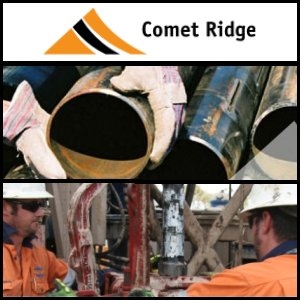 ASX:COI) today announced a Contingent Resource Certification of 67 Petajoules (PJ) of 2C and 1,870 PJ of 3C Resources booked in the Gunn Project Area of ATP 744P, which is held 100% by Comet Ridge. It is the first Coal Seam Gas (CSG) resource certification in Australia's new CSG frontier, the highly prospective Galilee Basin in Queensland. In addition to the Contingent Resources, Comet Ridge has also booked 597 PJ of Prospective Resources in the Gunn Project Area. The Contingent and Prospective Resources have been certified by industry recognised, Independent Reserves Certifiers, Netherland, Sewell & Assoc (NSAI) of Dallas, Texas.

ASX:EVE) has received permits for a diamond drilling programme at the Company's 100% owned Aurora uranium deposit in southeast Oregon, USA. A drill rig will be mobilised to the project site in early December and approximately 16 holes for 1,600 metres drilling are planned for the current phase of work. Drilling is intended to provide information to feed into feasibility studies for the Aurora deposit and support an upgrade of the current resource estimate which currently stands at 17.69 Mt at 0.0518% eU3O8, for a total of 18.3 Mlb contained eU3O8.

ASX:DRA) announced a high grade intercept of 20.0m at 34.67 g/t gold from the surface diamond core drilling program completed at the Orivesi Gold Mine in Finland. The near surface high grade drill results continue to confirm that the mineralisation extends to shallower depths, at widths and grades that potentially are amenable to underground mining. The company intends to accelerate exploration, which potentially could result in a significant increase in the life of the Orivesi Gold Mine.

ASX:MNM) has received all sample analyses for the recently completed drilling program at the Barkly Phosphate Project in the Northern Territory. Assay data review suggests mappable continuity of lithology may exist across the tenement area. Current activity includes mapping stratigraphic and lithologic data to provide for design of an in-fill and step-out drill program. The program is being developed for mid 2011.