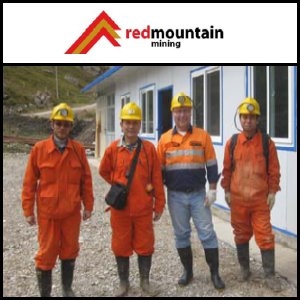 ASX:RMX) will commence a Stage II underground drilling program on 29 September 2011 at the Zhongqu project in Gansu Province, China. Stage I drilling at the project intersected significant gold mineralisation including 31m at 4.61 g/t gold and 14.3m at 4.50 g/t gold. Stage II drilling aims to get a better understanding of the orientation and tonnage potential of the high-grade gold structures with results to be expected in 6-8 weeks.

ASX:ATI) has signed an agreement to undertake a development study of Vietnam's bauxite extraction and supply chain industry, particularly in the Central Highlands of the country. The development study will assess the 'mine-rail-port' proposal submitted by Atlantic to local and national authorities, and is an important step in achieving Atlantic's objectives of undertaking a full feasibility study of an integrated long-term bauxite supply chain solution and forming a joint venture to develop a large-scale bauxite mining project in Vietnam.

ASX:RRI) has commenced a major resource definition drilling programme at the Wonmunna Project in the East Pilbara iron ore mining region. The Company has engaged three rigs to accelerate the program to keep in line with the planned project development timetable of starting the Feasibility Study before Christmas this year. Production is expected to commence by the first quarter of 2013.

ASX:RFV) today announced the acquisition of two new gold projects in the Lake Victoria Goldfields region of Tanzania. These acquisitions, along with the recently acquired Maji Moto project, fall in line with Rift Valley's objective of targeting more advanced projects that can be fast-tracked. The Company plans to commence first phase of drilling on the two new projects as soon as possible.

NASDAQ:MSHL) through the purchase of approximately 1.33 million common shares of Marshall Edwards. The investment will support Marshall Edwards' ongoing oncology research and the development of two lead drug candidates, ME-143 and ME-344.

BOM:533107) and Airbus have signed a Memorandum of Understanding to develop state-of-the-art Maintenance, Repair and Overhaul facilities and associated infrastructure in India. The joint venture will be the first of its kind to be set up in India.