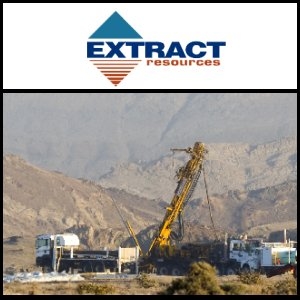 TSE:EXT) has received a two year extension for the Husab Uranium Project in Namibia, which will allow Extract to continue its exploration program over the 15 kilometre prospective gold trend until April 2013. Zones 1, 2, 3 and 4 of the Project has an estimated total Inferred Resource of 110 million pounds of U308. The Company plans to develop a large-scale open-pit mining operation with an anticipated annual production of approximately 15 million pounds of uranium, which will make the Project the second-largest uranium mine in the world.

ASX:MOY) has signed an agreement with Galliard Resources Corp., whereby two parties will establish a joint venture to explore Millennium Minerals' 100% owned Beatons Creek gold tenements and Galliard has an option to earn up to a 70% interest in the tenements. Historical drilling programs at the tenements returned results including 2 metres at 116 g/t gold and 12 metres at 7.27 g/t gold. An aggressive drilling program is being planned in 2011 to test the tenements' potential.

ASX:SFX) has commenced drilling at its Yandanooka heavy mineral sand project in Western Australia. Drilling is expected to confirm the results of historical drilling and to explore higher grade zones, which will provide additional data to facilitate the estimation of a JORC compliant inferred resource.