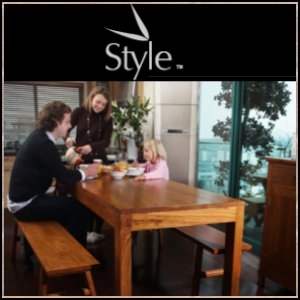 NYSE:WMT). Metals and oil were all trading higher on Tuesday.

In economics news, Australia's labour market has shown the sign of cooling down. According to the Wage Report released by the Melbourne Institute yesterday, the total pay growth over the 12 months to August 2010 slowed to 4.0%. However, employees do not expect a substantial tightening in the labour market, expecting a moderate 2.6% pay rise over the next 12 months.

ASX:SYP) has formed partnership with Asia Timber Products Limited, marking its entry into the fast-growing Chinese flooring market. Asia Timber Products, one of the biggest panel and flooring manufacturers and distributors in China, will distribute Style's high performance, environmentally friendly flooring products across China through 25 logistics centres and 750 independent specialty retail stores. This affiliation comes after Style strengthened its presence in Australia, USA, Russia and Europe and will see the company significantly grow its business over the coming years.

ASX:LEI), an A$409 million contract to construct the West Kowloon Terminus Approach Tunnel and Track Fan Tunnel section of the Guangzhou - Shenzhen - Hong Kong Express Rail Link (XRL). Contract works start in August 2010 with scheduled completion in 2015. This is the second XRL project contract to be awarded to Leighton Asia, following the award of an A$463 million contract in March this year for the construction the Tse Uk Tsuen to Shek Yam section. Upon completion, the XRL will greatly enhance accessibility between Hong Kong and mainland China, further strengthening the social and economic development.

ASX:MTE) said today that the approval process for the Joint Venture Agreement between the company and China Coal Import & Export Company (CCIEC), a wholly owned subsidiary of China National Coal Group Corp (China Coal), is progressing positively. MetroCoal is now very close to starting the Joint Venture and commencing exploration drilling on EPC 1165 in Queensland with China Coal. Under the agreement, CCIEC has acquired a 51% interest in MetroCoal's EPC 1165 for an agreed expenditure commitment of AUD$30 million. CCIEC will be the Manager of the Joint Venture and will also have first right to enter into a Joint Venture over the other MetroCoal tenements.