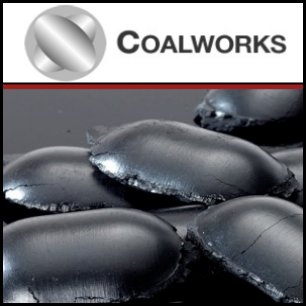 A unit of junior coal company Coalworks Ltd. (AS:CWK) said it agreed on a joint venture with an Australian unit of Japanese trading firm Itochu Corp. (TYO:8001) to develop the Vickery South project.
Sydney, Feb 19, 2010 AEST (ABN Newswire) - The Australian sharemarket fell on Thursday as investors digested some mixed earnings results. Investors also managed to take profit for the market after two days gains. At the close, the benchmark S&P/ASX 200 index lost 13 points, or 0.28 per cent, to 4654.9, while the broader All Ordinaries index gave up 12.9 points, or 0.28 per cent to 4673.9.

RBA assistant governor of economics Philip Lowe says the China economic story has some decades to run and that underlies much of the positives for the Australian economy. He anticipates economy growth will be good for the next 20 years in China and infrastucture investment there could continue growing. Lowe also said the central bank expected Australia to grow by 3.25 to 3.5 percent this year and next, up from an estimated 2.0 percent in 2009.

ASX:GFF). ACCC has formed a preliminary view that the proposed acquisition could enable the merged firm to unilaterally exercise market power in these markets.

ASX:OXX) said it intends to make a conditional offer to acquire all of the ordinary shares in the capital of Orion Petroleum Limited (

ASX:OIP) on the basis of one Octanex share for every six Orion. Octanex, currently holding approximately 7.079 per cent of Orion's issues capital, said it strongly opposes the proposed merger of Orion with Gas2Grid Limited (

ASX:QAN) has returned to profit in the first half of its fiscal year. Qantas posted a A$58 million net profit for the six months to December 31, after a A$93 million loss in the second half of 2008/09. Chief Executive Alan Joyce says it is inevitable airfares will have to increase in 2010 from "unprecedented low levels".

ASX:SGM) said net profit for the six months ended December 31 was A$39.9 million, up from a A$79.4 million interim loss last year. Sims declared an interim dividend of A$0.1 cents per share, down from A$0.28 last year. Sims said markets for ferrous, or iron-containing, metals have strengthened since December due to improved demand from developing countries, while nonferrous markets have remained liquid, with relatively firm demand.

ASX:AMP) delivered a 27 per cent rise in annual profit after a rebound in financial markets. The company booked a net profit of A$739 million for calendar 2009, up from A$580 million in 2008. Chief executive Craig Dunn said the fundamentals of the wealth management sector remain very attractive in AMP's core markets and it is still interested in wealth manager and insurer AXA APH (

ASX:WES) said first-half net profit rose 1% to A$879 million from A$871 million a year earlier, with the turnaround of its retail division offsetting declines from its resource business. Coles and hardware chain Bunnings together contributed more than half of the group's earnings before interest and tax of A$1.54 billion. The company remained cautious about the outlook for its retail business as interest rates could continue to increase.

A unit of junior coal company Coalworks Ltd. (AS:CWK) said it agreed on a joint venture with an Australian unit of Japanese trading firm Itochu Corp. (

ASX:LGL) reported a net loss of US$234 million in 2009 compared to a net profit of US$111.0 million a year earlier. Lihir is planning on selling Ballarat by the end of the first quarter, and has received widespread interest from Australia and abroad.

ASX:AHD) net profit rose 50.2 per cent to A$76.23 million in the six months ended December 31 from A$50.76 million for the first half of last year. The strong result was driven by its outstanding performance of our Exhibition business, particularly in Germany, and also benefited from a better-than-expected Hotel business with the beginnings of a recovery in business travel clearly evident.

ASX:ABC) posted full year net profit of A$123.1 million, up 1.9 per cnet on A$120.8 million a year earlier and ahead of company guidance for between A$105 million and A$115 million. However, Adelaide Brighton still expects demand for cement to weaken by about 5% in 2010, while lime volumes are forecast to be flat.