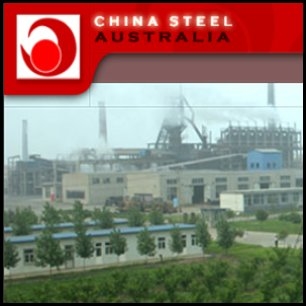 China Steel Australia Limited (ASX:CNH) reported that increased demand from Chinese Customers has resulted in the company achieving 100 per cent production capacity.
Sydney, Jan 19, 2010 AEST (ABN Newswire) - The Australian share market shrugged off the concerns over US investment bank JPMorgan and closed slightly higher on Monday. Australian banks rose as the upbeat mood continued in this session after Commonwealth Bank's profit upgrade on Friday. The benchmark S&P/ASX200 index advanced 11.5 points, or 0.23 per cent, to 4,911.1 points, while the broader All Ordinaries index gained 6.6 points, or 0.13 per cent, to 4,936.1 points.

The TD Securities-Melbourne Institute inflation gauge rose by 0.3 per cent last month, equalling the 0.3 per cent increase in November. Annual rate rose to 2.6 per cent in December, as seasonal price increases for holiday travel and accommodation, petrol and fruit. The Reserve Bank of Australia (RBA) is expected to reduce its emergency monetary stimulus after recent positive economic data and the fast pace of inflation. The market now is widely expecting official interest rate will be lifted by 25 points to 4 per cent at the February RBA board meeting and a 5 per cent in 12 months' time.

ASX:HRR) said it has finalised the sale of 5.3 million shares in Mineral Resources Limited (

ASX:POL). Heron has netted nearly A$37.9 million from the sale. Heron had acquired the MIN shares after accepting the latter's takeover offer for Polaris, and received in excess of A$40 million for its stake in Polaris.
Energy technology company Coretrack Ltd (

ASX:CKK) says it has signed a mandate with Cygnet Capital Pty Ltd to raise A$10m before costs. Under the acquisition, a first tranche of 6.58 million shares will be issued followed by a parcel of shares equating to the net amount Globe Drill receives from the government in relation to a research and development tax offset. The transaction, if completed, is expected to create a leading drilling technology and services company.

ASX:CNH) reported that increased demand from Chinese Customers has resulted in the company achieving 100 per cent production capacity. The company produces both nickel pig iron and merchant pig iron at its plant near the city of Linyi in China's Shandong Province.

ASX:DJW) reported a A$15.1 million net profit for the half-year to December 31, 2009, down 49 per cent from a A$29.7 million profit in previous corresponding period. The company said lower levels of option volatility could challenge operating income during the second half of the financial year. However, it expects a small recovery in revenue during the second half of 2009/10.

ASX:ANM) said its joint venture alloy production plant in Henan Province in China undertook a commissioning phase during the last quarter of 2009. The joint venture has secured two sales contracts aggregating 1600 tonnes for delivery in 2010. Delivery under these contracts is to be made in the first and second quarters of the year. These confirmed orders will account for 45 per cent of production capacity.

ASX:LGL) chief executive Arthur Hood has resigned and will step down immediately amid criticism of a poor acquisition that contributed to the board's decision not to renew his contract.