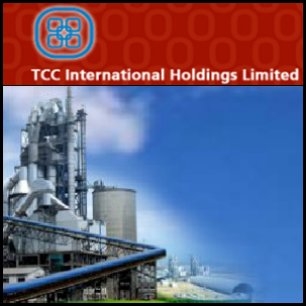 Cement producer TCC International Holdings Ltd. (HKG:1136), a 44%-owned affiliate of Taiwan Cement Corp. (TPE:1101), is raising up to US$113 million via share placement
Sydney, Jan 15, 2010 AEST (ABN Newswire) - Wall Street shares on Thursday shrugged off the news of disappointing economic data and rebounded from early loss. US retail sales fell unexpectedly by 0.3 per cent in December, a poor sign for the holiday shopping season. The market rise was led by technology shares as investors were expecting strong numbers from Intel.

Asian markets finished mostly higher Thursday. The Shanghai Composite index was up 1.4%, after a sharp drop in previous session on Chinese government's tightening monetary policy. But Hong Kong's Hang Seng index shed 0.2% over the worries of further tightening by mainland. Japan's Nikkei 225 climbed 1.6% and South Korea's Kospi Composite rose 0.9%. Technology shares are expected to soar in Asia markets today, as Intel's better than expected quarterly profit could be a sign of tech sector recovery in 2010.

TYO:7201) said in a statement that its car sales in China rose 48 percent to a record 518,968 passenger vehicles in 2009. Nissan, which produces sedans and light commercial vehicles in a 50-50 joint venture with Dong Feng Motor, said it aims to sell 1m cars, trucks and buses in 2010, two years ahead of schedule.

TYO:9946), South Korea's Lotte Group and U.S. private equity firm Carlyle Group will make final bids for South Korean retailer Buy The Way on Friday, said sources. Asia-focused private equity firm Unitas Capital, which acquired South Korea's fourth-largest convenience store chain in July 2006 for about US$200 million, is looking to sell Buy The Why for no less than 250 billion Korean won ($223 million) and aims to close the deal by the end of the month, said the sources.

SEO:047050) at the top of its list of potential takeover targets, its CEO said on Thursday. POSCO also indicated on Thursday it will acquire a 15% stake in Australia's Roy Hill mine as part of an effort to secure a stable supply of raw materials.

TYO:9205) and expects to book a loss of 9 billion yen from the sale in the current fiscal year. The company now estimates a net profit of 10 billion yen for the year ending March 31, compared with a previous forecast of 15 billion yen.

TPE:1101), is raising up to US$113 million in a share placement to help fund the purchase of cement assets from a unit of Prosperity Minerals Holdings Ltd. (