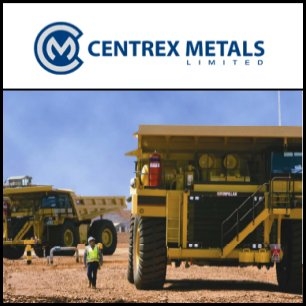 Centrex Metals Limited (ASX:CXM) said it and China's Shenyang Orient Iron & Steel (Group) Co., Ltd have signed a five year Hematite Ore Sales Agreement plus one year extension option cover 1 million tpa of Wilgerup hematite product. The long term agreement ensures that 100 per cent of its Wilgerup hematite ore is sold.
Sydney, Nov 13, 2009 AEST (ABN Newswire) - Wall Street rally ended on Thursday as the market was suffering from "rally fatigue". The better-than-expected US jobless claims and corporate news failed to move investors who had been bombarded by positive news in recent sessions. A surge in oil stockpiles also raised concerns over the US recovery.

The Australian stock market opened lower in early trade after negative leads from overseas. Yesterday the share market closed flat despite strong gains in the mining sector. The benchmark S&P/ASX200 index fell 9.1 points, or 0.19 per cent, at 4747.9 points, while the broader All Ordinaries index lost 7.7 points, or 0.16 per cent, to 4758.2 points.

The Aussie dollar traded lower today after profit-taking and news of US efforts to maintain a strong currency. It opened below the 93 US cents this morning. During the overnight session, the unit traded between US$0.9215 and US$0.9355.

Australia's jobless rate has increased to 5.8 per cent in October, its highest level since January 2002, according to the Australian Bureau of Statistics. But the number of employed people increased by a better-than-expected 24,500 to 10.8 million in October. Analysts expect the unemployment rate could either reach its peak or be close to it.

The Warehouse Group Limited (ASX:WHS) reported group sales for the first quarter ended 1 November were NZ$362.9 million, down 1.0 per cent on the corresponding quarter last year, but after adjusting for the discontinued fresh produce, frozen food and liquor operations, sales were up by 1.2%. The company reaffirmed that although consumer spending was expected to improved, the extent of any improvement was uncertain.

Bluescope Steel (ASX:BSL) expects to post a small net loss for the first half year ended 31 December 2009, as the strong Australian dollar and softer steel prices largely offset higher sales volumes. Based on the expected financial performance for the first half, and on the current outlook, the board does not expect to declare a dividend when the half-year results are finalised.

Caltex Australia (ASX:CTX) chief executive Julian Segal said the company would consider venturing into the LNG market as well as increasing its share of the bio-fuels market to reduce fluctuations in earnings from difficult market conditions. But he noted that the Australian Competition and Consumer Commission had asked for more information and postponed its decision on Caltex's proposed acquisition of Mobil service stations.