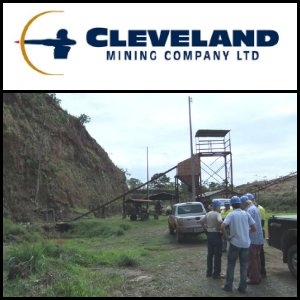 CLVMF:OTCMKTS) updates shareholders on the continued trading suspension and next steps for Cleveland Mining.

The Company suspended official quotation at the beginning of October in order to:

- Finalise the Audited Annual Accounts; and

- Complete the first stage of the refinance of the debt with Platinum Partners LLP (Platinum).

These 2 activities are integrally linked due to the material nature of refinancing the debt to Platinum. The Company had originally aimed to complete both of these within 2 weeks, but events outside of the control of the Company have prevented them from being achieved on time, and the Company's shares will remain in suspension until such time as they have been completed.

To elaborate, prior to the re-structure of the Platinum loan, Cleveland owed US$13.9 million, with a due date of 19 September 2016. Due to the material nature of this debt, our Auditors did not wish to commence the Audit until a restructure was agreed and signed off by Platinum This was executed on 19 September 2016, and as a result led to a significant delay in commencing work to prepare and finalise the audited accounts. The re-structure of the debt included an initial payment of US$1.2m by 19 October 2016 ("initial payment"). The initial payment was agreed to be made out of the sale of Shares already issued to Platinum. To enable that sale, Platinum were required to make available the 29.3M Cleveland shares that they held, so that they could be sold.

It transpires these shares are now under the control of a court appointed Liquidator in the Cayman Islands, and as a result Platinum has not performed the agreement because Cleveland is unable to convey title to those shares. The inability of Platinum to perform the agreement has delayed and continues to delay Cleveland's ability to arrange a full refinance of the Platinum loan. Cleveland are not obliged to make any payments until this situation has been rectified.

In conjunction with the settlement of the Platinum loan, Cleveland is working to finalise the buyout of its Brazilian Joint Venture partner and to complete the planned work program at Cleveland's Premier project. The work program has largely been completed, although some capital requirements remain, due to our restricted access to new funds as a result of the uncertainty surrounding the situation prevailing with Platinum.

Cleveland, although very advanced in discussions with a number of parties to complete this re-finance, has been delayed in part by the deteriorating position of Platinum which is currently subject to an SEC Investigation and an FBI investigation into alleged criminal activities and appears destined for liquidation. Indications are that funding will not be able to be finalised until after a liquidator (or other external controller) is appointed to Platinum. It is apparent that the current board of Platinum can no longer enter into negotiations on Platinum's behalf and incoming financiers must wait until an official controller is appointed, so that appropriate contracts can be drawn.

Further detail regarding this is freely available on the internet, in particular reported by both the Wall Street Journal (WSJ), Reuters and New York Post.

Whilst the position of Platinum has had a negative impact on the speed that the Company can complete the re-financing and thus finalise / release the audited Annual Accounts & Annual Report (and now also the timing of the release of the September Quarterly Report and Annual General Meeting), the Company remains very positive that this will be resolved soon and allow the suspension to be lifted and trading to re-commence with the Company being in a materially improved financial position.

To listen to the audio broadcast, please visit:
http://www.abnnewswire.net/press/en/85984/cdg 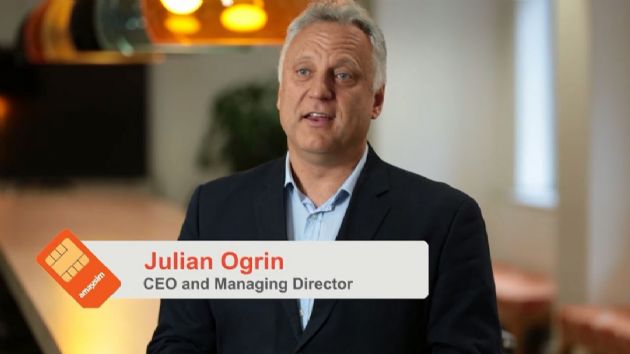