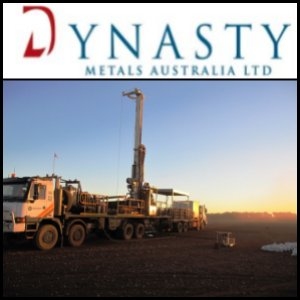 ASX:QRN) that three parties have entered into an Alliance Study Agreement to undertake "a joint evaluation of a fully integrated mine, rail and port logistics solution in Western Australia's East Pilbara region." (21 August 2012)

In its announcement on 26 April 2012, QR National stated that it "was evaluating an independent multi-party railway to connect iron ore mines in the East Pilbara to Port Headland." And further that "under this proposal, the parties would work towards Atlas becoming a cornerstone user of the infrastructure. However the railway would be developed on the basis of other miners connecting and accessing the railway through staged development."

Dynasty's Board views this important Alliance study agreement as a great leap forward in solving the regional infrastructure bottle-neck whilst potentially providing options for other mining operations in the region. The board looks forward to investigating the possibility of accessing this proposed rail network at the appropriate time along with other infrastructure solutions to deliver ores to port facilities.

The proposed independent rail corridor is likely to be less than 75kms from Dynasty's Spearhole Deposit (see figure 1), which could significantly reduce the capital expenditure costs for Dynasty's Spearhole project, allowing the project to be commenced at a smaller production module of between 1-2Mtpa then expanded to 10Mtpa at a later stage.

Dynasty has also identified other exploration targets which are close to the new rail corridor, a technical crew has been sent to conduct geophysical surveys over E52/2591 (figure 2), the survey is likely to be completed in early September and should provide further drilling target areas with potential for DSO grade iron ore. The E52/2591 is adjacent to BHP's Mt Newman project, the historical drillings nearby had encouraging high grade iron intersections including 76m @ 62% Fe.

To view the complete Dynasty Metals announcement including Figures 1 and 2, please click the link below:
http://media.abnnewswire.net/media/en/docs/ASX-DMA-601140.pdf