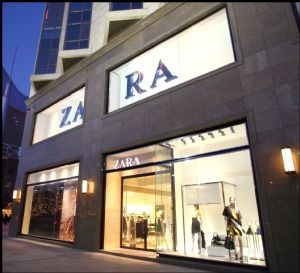 The Groups expansion strategy has created a further 9,374 new jobs in 2011, through the opening of 483 stores in 49 markets including 5 new markets: Australia, Taiwan, Azerbaijan, South Africa and Peru - increasing its total workforce to 109,512.

Inditex's expansion in Asian markets consisted of 132 store openings throughout China, inclusive of 30 new Zara locations. Two Inditex concepts, Oysho and Zara home, were also opened in China during 2011 - with 17 Oysho and 5 Zara home stores, bringing the complete number of Inditex stores there to 275.

Japan and Korea, saw 15 and 13 new stores, respectively, introducing the first Bershka locations within both markets as well as the first Pull&Bear and Stradivarius stores to open in South Korea.

Inditex have also announced it intends to launch an online store with Zara to begin offering its fashions online in China during next winter season, extending its e-commerce business to one of the fastest-growing markets for Inditex concepts. The Group continued to develop its Internet sales platforms in 2011, and by September 2011 all of its formats had online stores. By the end of the year, Inditex retailers had e-stores in 18 European countries. Zara's online shop also began welcoming customers in the US and Japan.

As for its continuing expansion strategies into 2012, Inditex plans to increase total number of stores between 480 and 520 new establishments. Among these included a Zara store opening during early May in New York City, on the corner of Fifth Avenue and 52nd Street, which boasts 3,500 square metres and is now a worldwide flagship for the brand.

The Inditex Group is made up of more than 100 companies operating in textile design, manufacturing and distribution. The group's success and its unique business model, based on innovation and flexibility, have made Inditex one of the biggest fashion retailers in the world.