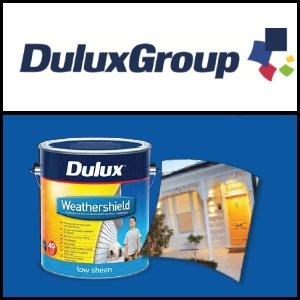 ASX:DLX) says today that its DGL International business in China will merge with a Hong Kong-based coating products producer, Camelpaint, to form a new company, DGL Camel International Limited, in which DuluxGroup will hold 51% interest. The merger will create a stronger platform for DuluxGroup to market and distribute coatings and associated products in China. Transaction is expected to be finalised by the end of the 2011 calendar year.

ASX:ICX) has discovered a significant coal seam structure in its South Blackall Project in Queensland. Multiple coal seams have been encountered during a drilling program, with seam thicknesses average from 1 to 3 metres. The results are consistent with predictive modelling and will contribute to a maiden JORC resource in the future.

ASX:CAY) has signed an agreement to acquire the Pinarello gold project in southwest Burkina Faso. The Project is located in the Hounde greenstone belt, which hosts the 3.3 million ounce Mana gold mine and the 400,000 ounce Bondi gold deposit. A first pass exploration program is planned to commence on the Project in December.