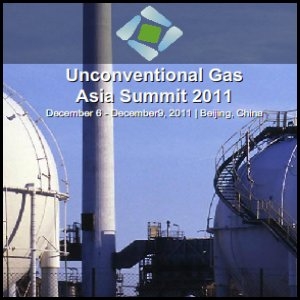 China completed its first horizontal shale gas well, after 11 months of drilling, as the world's biggest energy consumer seeks to tap its reserves of the cleaner-burning fuel."Once we start large-scale production, shale gas won't be an unconventional fuel for China anymore and it will play an important role to supply China's energy needs," Che Changbo, said, deputy director of the Ministry of Land and Resource's oil and gas strategy center.

2nd Unconventional Gas Asia Summit 2011, which will be held on Dec 6th-9th, 2011, Beijing, China, is the international event focusing on Asia market including the policy changing, technical innovation and the project updating.

Hear the latest views and forecasts from key industry speakers from along the entire value chain, Speaker under prior consideration:

On behalf of the organizing committee, we would like to invite you and other senior executives to attend the 2nd Unconventional Gas Asia Summit. With your attendance in UGAS we believe it will bring up the profile of your firm in the unconventional gas industry and probably bring more potential business to your company.

SZ&W Group is one of the leading B2B companies in China, specialized in organizing top-level professional conferences, events or forums around the world, serving clients from various industries, especially in energy, healthcare, pharmaceuticals, and water etc.