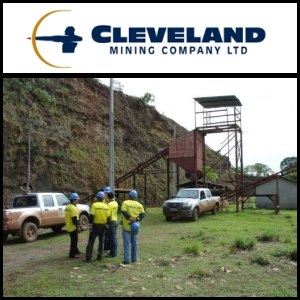 Drilling has delineated a 250m strike-length of multiple, stacked, mineralised zones with variable down-hole widths ranging from 0.4m to 16.50m per zone.

Significant gold-bearing mineralisation was intercepted in four of the six holes drilled at the Dona Maria Garimpo. The mineralisation is hosted within different lithologies from those previously identified in the O Capitão project area and occurs in three distinct horizons associated with an increase in sulphides, biotite alteration and quartz veining. The surface expression of the host lithologies has been identified.

Seven additional holes were drilled to test the continuity of the mineralisation and all holes have intersected the targeted lithology. The assay results for the additional drill holes are pending.

Edifica Participações Ltda ("Edifica"), Cleveland Mining's Joint Venture partner in the Premier, Guarinhos and Baú projects, has exercised a purchase option for 50% of O Capitão. Edifica will pay Cleveland approximately $1 million dollars (50% of all costs incurred on the project to date with the final figure still to be determined) to exercise the option and will contribute equally to all costs going forward.

The new joint venture will provide the option to process ore from both Premier and O Capitão at the same facility should mining proceed at O Capitão.

"Since Cleveland acquired O Capitão 18 months ago, we have identified high-grade extensions of the old Garimpeiro pit, resolved a formerly disputed ownership status, and have now discovered shallow and potentially significant gold-bearing mineralisation," said Mr Mendelawitz "I am delighted that we can expand our Joint Venture with Edifica to include O Capitão. Our understanding of mining and exploration fits perfectly with their ability to source projects, to understand the local operating environment, and provide connections and local credibility within Brazil."

"To have O Capitão as part of the Premier Joint Venture, not only allows us to share the exploration and development risks, but also means that we can gain the economies of scale from a centralised plant, thus reducing the barriers to turning mineralisation at O Capitão into an economic resource."

Cleveland has begun transferring the O Capitão tenements into the Joint Venture entity. Soon after the completion of this process, the Company aims to lodge an application to transfer the exploration lease into a mining lease.

For the complete drilling results table, please refer to: http://media.abnnewswire.net/media/en/docs/68622-ASX-CDG-550427.pdf