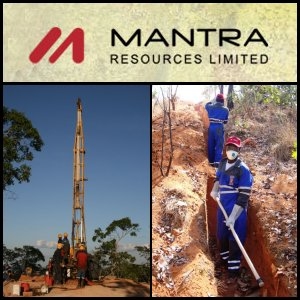 ASX:MRU) has updated the Mineral Resource Estimate for the Company's Nyota Prospect, part of the wholly owned Mkuju River Project in southern Tanzania. The resource has been estimated at 108.9 million tonnes averaging 422 ppm U3O8 for a contained 101.4 million pounds of U3O8. Majority of the resource is within 60 metres of surface. The company will commence an exploration drilling program until mid December 2010 to test a number of target areas adjacent to the existing resource areas at Nyota.

ASX:CBD), has begun work on its solar power plant in Thailand. The project, which covers design, equipment supply, construction, operation and maintenance, is being undertaken by wholly owned CBD subsidiary, eco-Kinetics. Stage 1 of the project is 8 MW, with a possible subsequent stage taking it to a 99 MW project having a value of in excess of A$300 million. The stage 1 is expected to be completed during the first half of 2011.

ASX:IRM) announced an additional Inferred Bauxite Resource of 44.2Mt within E70/2692 in the Central Bindoon region within the Wandoo Bauxite Project in Western Australia. Current Global Inferred Resources of bauxite at Wandoo are now in excess of 61Mt. Resource estimation on data accumulated from the maiden drilling program within E70/2693 is underway. Specifications for bulk sampling and metallurgical test work have been finalised.