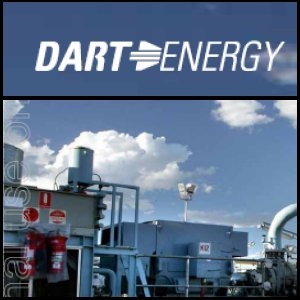 PINK:ARWEF) ("Arrow Energy") and the subsequent establishment of Dart as an independent ASX-listed company, the Board has been seeking to build out the executive and management team of Dart.

The objective has been to ensure a strong and highly experienced team is in place both at a corporate level and in-country. This leadership team will be capable of leading a dynamic, growth-oriented international business over the coming years, based on experience and a track-record of delivery across all aspects of the coal bed methane ("CBM") operations cycle and value chain.

As part of this effort, the Board of Dart is pleased to announce a number of new appointments that have, or will shortly, take effect.

Nathan Rayner has joined Dart as Chief Operating Officer, based in Singapore. Nathan brings valuable experience in the field of reservoir and petroleum engineering. Most recently, Nathan held the position of General Manager Petroleum Engineering at Arrow Energy and was responsible for field development and planning, optimisation of reserves, well design selection and identification of production enhancement opportunities.

Martin Cooper will be joining Dart as Chief Financial Officer, based in Singapore. Martin was previously the CFO for SciGen Group (

ASX:SIE), an ASX listed company based in Singapore with operations across Australia, Asia and the Middle East. Prior to that, Martin was the Group Finance Director and Company Secretary for Interregnum Group plc, a London listed company, based in London. Shaun Scott will step down as Acting CFO on Martin's commencement, but will continue as an Executive Director of Dart.

Peter Roles has assumed the responsibilities of Chief Technical Officer, based in Singapore. Peter has over 30 year's oil and gas experience. He was the Asset General Manager for Arrow Energy's Southern Operations before relocating in 2009 to Singapore to take up the role of VP, International Operations. Peter's experience includes reservoir and drilling through to transmission systems and major facilities construction. Peter previously held asset and project management roles in CH4, Santos (

Toby Hewitt has joined Dart as General Counsel, based in Singapore. Toby was previously a Consultant with leading law firm Herbert Smith in Singapore, specialising in oil & gas and energy work across the Asia region. Prior to that, Toby was in-house counsel with Santos in Indonesia and BHP Billiton (

NYSE:BHP) (WMC Resources) in Australia, focused on the oil and gas and mining sectors.

Michael Bowe has joined Dart as General Manager, Operations, Indonesia, based in Jakarta. Michael spent 5 years with Arrow Energy as Production Manager - Moranbah and, more recently, as Exploitation Manager, where he played a key role in the LNG pre-feasibility study and exploration pilot wells. Prior to that, Michael was the Production Coordinator for Santos in Australia.

Justin Walta has assumed the responsibilities of General Manager, Operations, China, based in Beijing. He has 12 years' of experience in the oil and gas industry, specialising in drilling, production and exploration operations. Justin has lived and worked in China the last 4 years and is very familiar with Chinese-based upstream exploration activities. Prior to relocating to China, Justin was with BHP and assigned to the Moranbah gas Project in Australia.

Chris Ohlrich has joined Dart as General Manager, Commercial, Australia, based in Brisbane. Chris was previously the General Manager Commercial with Arrow Energy, with responsibilities for M&A activities in Australia as well as financial and commercial aspects of the integrated LNG project. Prior to Arrow Energy, Chris was Business Development Manager with GlaxoSmithKline (

Andrew Fang has joined Dart as Commercial Manager, Asia, based in Singapore. Andrew was previously with Wood MacKenzie where he was a Research Analyst, with a specific focus on pan-Asian conventional and unconventional gas markets and businesses. Prior to that, Andrew was an Energy Broker with several firms.

In addition to the above, Dart has secured the ongoing services of two specialist consultants to assist with the technical evaluation and implementation of various projects:

Dr Dave Mathew - formerly the Country Manager for Arrow International in China. Dave has over 30 years' experience in international coal and CBM exploration, project development and evaluation. He was one of the pioneers of the coal seam gas industry in Australia and a founding shareholder of CH4 Gas, one of the two companies that were merged to create Arrow Energy in 2006. He is a past president of the Australian Coal Seam Gas Council.

Dr Tim Moore - formerly the Country Manager for Arrow International in Indonesia. Tim has over 20 years experience in coal and coal seam gas geology. Tim led the coal seam gas exploration and development programs in the Huntly and Taranaki regions of New Zealand. He also holds the position of Adjunct Associate Professor at the Department of Geological Sciences, University of Canterbury, New Zealand, and has published over 200 academic papers on coal and coal seam gas.

Over the next several months, the intention of the Board is to continue to supplement the Dart executive and management team and to fill a number of remaining open positions.

Additionally, as Dart increases its involvement in and ownership of Apollo Gas (

ASX:AZO) and Composite Energy, Dart will consider how best to incorporate those management teams into the company's management structure.

Dart Chief Executive, Mr Simon Potter, said: "We are extremely pleased with the progress made to date in filling out the leadership team of Dart. Together our new appointments and existing employees comprise a talented, capable and experienced team of more than 80 people across Dart's business, capable of rapidly moving the business forward and delivering value for our shareholders".

The current Dart executive and management team, including existing staff and the new appointments, are as follows:

Dart Energy Limited (ASX:DTE) is a publicly listed Australian company focused on the development of coal bed methane in eastern Australia and Asia. The company has established offices in Singapore, Australia, China, India, Indonesia and Vietnam servicing a diverse portfolio of quality projects, assets and opportunities. Our projects are predominantly located in energy constrained markets with large populations and high forecast demand growth resulting in high values for gas. 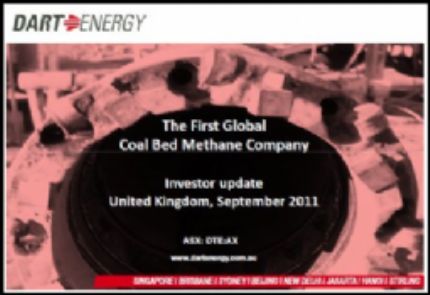