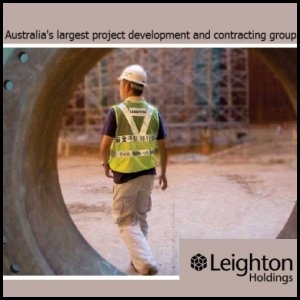 Leighton Holdings (ASX:LEI) said today that Leighton Asia, its wholly owned subsidiary, has won a A$1.1 billion contract for the expansion of the mining services at the MSJ coal mine in Indonesia.
Sydney, June 17, 2010 AEST (ABN Newswire) - The Australian stocks market was slightly lower in early trade, while Wall Street delivered a flat lead overnight. Yesterday the local market posted a strong gain of 1.2 per cent, led by materials and energy stocks.

On the economic front today, the Melbourne Institute releases its Household Saving and Investment Report for the June quarter. The Australian Chamber of Commerce and Industry and Westpac release a survey of industrial trends.

ASX:LEI) said today that Leighton Asia, its wholly owned subsidiary, has won a A$1.1 billion contract for the expansion of the mining services at the MSJ coal mine in Indonesia for PT Mahakam Sumber Jaya. The 6 years contract extension will see Leighton Asia expand its current overburden removal and coal mining operations to over 8 million tonnes of coal per annum. Leighton Asia said the contract will take its work in hand to record levels of over A$7 billion.

ASX:MQA) said today that it will acquire a stake in France-based highways and toll roads operator Autoroutes Paris-Rhin-Rhone (

EPA:APRR) from minority shareholders for EUR55.00 per APRR share as part of Eiffarie SAS acquisition. The total acquisition price is EUR853.7 million for a further 13.73 per cent. MQA will contribute a total of EUR155 million, funded from its existing cash reserves. The balance of funds will be contributed by Macquarie European Infrastructure Fund II and Eiffage SA. MQA currently owns a 25 per cent interest in Eiffarie, which in turn owns an 81.48pc interest in APRR.

ASX:UGL) has secured new works and project extensions with a range of blue chip customers in the resources, oil and gas and chemical sectors. These works have a total value of approximately A$280 million. The company said It demonstrate the strength through diversity within its resources business across a variety of blue chip clients, services and geographies. UGL also says it remains on tract to deliver on its previously stated full year 2009/10 earnings guidance, which is for profit to be in line with the prior record year.

ASX:AMU) said it has received unsolicited approaches from US bases companies expressing an interest in acquiring the company's assets. The board of Amadeus believes the current market value of the company's shares does not properly reflect the value of its underlying assets and has chosen Macquarie Capital Advisers to review all the options available to the company to unlock the value.