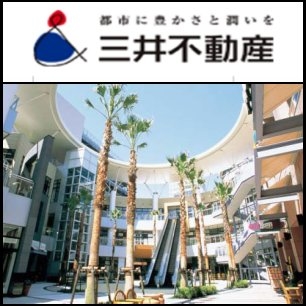 Japanese real estate developer Mitsui Fudosan Co. (TYO:8801) said it will build a large mall in China with Japanese trader Itochu Corp. (TYO:8001) and others including Chinese firms in the spring of next year.
Sydney, Mar 12, 2010 AEST (ABN Newswire) - Banking shares continued to push the US market higher overnight, despite resources and industrial sectors were hurt by worries that China may tighten its policy to cool the overheating economy after the country's latest inflation data. Consumer price index for February in China rose a faster-than-expected 2.7% in February from a year earlier. Thursday Asian markets closed mixed. Several major markets dropped after Chinese economic data. Japan's Nikkei index was up 1 per cent and Hong Kong's Hang Seng Index inched up 0.1%. Taiwan's Taiex lost 0.4 per cent and South Korea's Kospi shed 0.3 per cent. China's Shanghai Composited gave up most of its early gains and closed with a 0.1 per cent gain.

The big TV makers have announced their plans to introduce 3D TVs in coming months, betting they will become the next hot products in electronics market. LG Electronics Inc. (

LON:BSY), to supply 3D televisions during the first half of this year. The company is also in talks with several electronics retailers in the U.S. and Europe to sell its 3D TVs. Japanese giant Panasonic (

TYO:6752) launched its first three-dimensional TV in the US on Wednesday.

TYO:8801) said it will build a large mall in China with Japanese trader Itochu Corp. (

TYO:8001) and others including Chinese firms in the spring of next year. It will be the first time for the realtor to participate in the commercial complex business overseas, and Mitsui aims to increase profits by utilizing its know-how on commercial facility development and management in Japan. The mall, which will sell luxury brand items at discount prices, will have a floor space of about 16,960 square meters and house about 100 shops. The company plans to launch similar commercial centers in China and other East Asian countries.

HKG:0985) for about A$135 million. China Sci-Tech has completed its due diligence and paid a A$5 million deposit, with a further A$125 million to be paid on completion of Sale Agreement. Cape Lambert said it intends to make A$0.08 to A$0.10 return to shareholders following receipt of A$125 million.

HKG:0753) it will raise about 6.5 billion yuan via an issue of new shares, becoming the second Chinese carrier to announce fundraising plans this week. Air China plans to sell its new shares privately to a handful of investors. It would use the proceeds of the new share issue for working capital and to help lower debt.