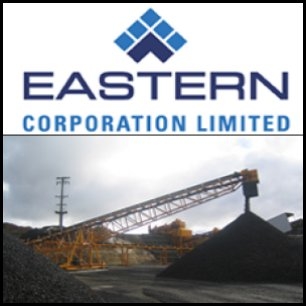 Eastern Corporation Ltd (ASX:ECU) said Wednesday that it has made an offer to acquire shares of the minority shareholders in its 68 per cent owned subsidiary company, Galilee Energy Ltd.
Sydney, Feb 11, 2010 AEST (ABN Newswire) - Australian shares gave up early gains after disappointing trade numbers from China raised concerns that Chinese economy is cooling. The market closed slightly higher as earnings reports from market heavyweights BHP Billiton and Commonwealth Bank helped the rise. At the close, the benchmark S&P/ASX200 index was 8.3 points higher, or 0.2 per cent, at 4513.4. The broader All Ordinaries index rose 12.3 points, or 0.3 per cent, to 4533.

Westpac/Melbourne Institute index of consumer sentiment unexpectedly fell 2.6 percent in February, partly due to the recent falls in the Australian dollar and share market. Meanwhile, most consumers expect interest rates to rise over the next 12 months, despite Reserve Bank of Australia left the cash rate unchanged in February.

Melbourne Institute's survey of consumer inflation expectations for January is due to release. Australian Bureau of Statistics is set to unveil the unemployment rate for January.

ASX:ECU) said Wednesday that it has made an offer to acquire shares of the minority shareholders in its 68 per cent owned subsidiary company, Galilee Energy Ltd. The offer to acquire the remaining shares of the unlisted Galilee is in line with Eastern's desire to simplify the ownership structure of its coal seam gas assets in Australia. Eastern has offered Galilee shareholders one Eastern share for every nine Galilee shares held.

ASX:CBA) posted a 13 per cent rise in first half net profit from a year earlier on the back of strong loan growth in key segments and a decline in bad debt charges. Net profit for the six months ended Dec. 31 rose to a record A$2.91 billion from A$2.57 billion the prior year. CBA has declared an interim dividend of $1.20 per share fully franked.

ASX:BHP) reported a net profit for the six months ended Dec. 31 was US$6.14 billion, which was more than double the US$2.62 billion the miner posted a year earlier and beating market expectations. BHP said that while global economic conditions had improved over the past six months, it was cautious about the speed and strength of the recovery in the developed world.

ASX:SUN) expects its first-half profit would rise to A$355 million-A$375 million, compared to a profit of A$258 million a year earlier. The improved result is primarily due to a strong contribution from the general insurance business which has benefited from more favourable weather conditions and enhanced returns from the investment portfolios, Suncorp said.

ASX:SGP) reported a net profit of A$213.7 million for the six months to December 31, compared to a net loss of A$726.9 million in the previous period. The property group also forecasts a second half profit higher than the first, and upgraded its full year earnings guidance.

ASX:AAC) says it could turn around its financial performance this year after booking a previously-flagged annual net loss of A$53.7 million for the year affected by extreme weather, a stronger Australian dollar and subdued cattle prices. Chief executive David Farley said the company could return to profitability soon.

ASX:ASZ) has signed a contract to provide IT services to Western Australian electricity utility Western Power Corporation. The A$35m contract is to provide services for an initial five-year term with two extension options of one year each. ASG Group will deliver a comprehensive range of services to Western Power including Data Centre facilities, Mid-Range Infrastructure, Network and VoIP Managed Infrastructure Services.