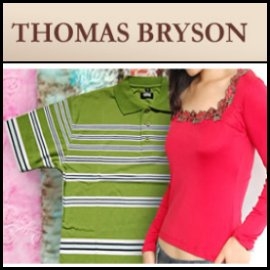 Textile manufacturer Thomas Bryson International (ASX:TBI) will for the first time open a chain of Thomas Bryson homeware stores in China. The first store will be 13,000sq m and will open early next year in Shaoxing, in Zhejiang province. Stores are also planned for Shanghai, Suzhou, Kunshan and Changshu.
Sydney, Nov 24, 2009 AEST (ABN Newswire) - US stocks posted a strong gain overnight boosted by better-than-expected home sales. Existing-home sales increased by 10.1 per cent to a 6.1 million annual rate, from 5.54 million in September, the National Association of Realtors said. The US dollar was weaker on Monday on expectations that the interest rate would remain at near zero.

The Australian Bureau of Statistics data showed that the car industry is improving. Australian new motor vehicle sales rose by 3.7 per cent, seasonally adjusted, to 81,122 units in October, from 78,243 units in September. The October figure was 15 per cent above the series' six-year low of 70,518 units in March.

Whitehaven Coal Limited (ASX:WHC) has completed the sale of a 7.5 per cent interest in the Narrabri joint venture project to a Korean consortium comprising Daewoo International Corporation(SEO:047050) and Korea Resources Corporation. The sale price for the transaction is A$125 million. The Korean consortium is also responsible for contributing 7.5 per cent of the costs of the project from 1 January 2008 going forward.

Ausmelt Limited (ASX:AET) said it has received a further non-binding indicative proposal for an off-market takeover offer for all the shares in Ausmelt in the range A$0.80 to A$0.90 per share. This follows receipt of an earlier indicative non-binding expression of interest from a different bidder to acquire all the shares in Ausmelt at a price of 60-70c per share, which was announced to the market on 19th October 2009.

Billabong (ASX:BBG) said today it agreed to acquire US-based online boardsports retailer Swell.com. The purchase price is not disclosed. Billabong said the acquisition would contribute less than 1 per cent to the company's revenue and would be slightly earnings per share positive in its first full-year as part of Billabong.

Diversa Ltd (ASX:DVA) today said it had acquired an initial 20 per cent ownership of Huon Capital Pty Ltd, a specialist Australian equities manager with A$40 million in assets under management. Consideration for the acquisition is an initial payment of 500,000 shares in Diversa and up to a further 1.5m shares based on the achievement of various performance milestones over the next 36 months.

Textile manufacturer Thomas Bryson International (ASX:TBI) will for the first time open a chain of Thomas Bryson homeware stores in China. The first store will be 13,000sq m and will open early next year in Shaoxing, in Zhejiang province. Stores are also planned for Shanghai, Suzhou, Kunshan and Changshu.

Qantas (ASX:QAN) will spend A$4.4 billion over the next two years as it purchases new aircraft and embarks on a campaign to shore up margins. The company will spend A$1.7 billion in the 2010 financial year and A$2.7 billion in 2011. That includes buying 43 planes of which eight will be Airbus SAS A380s.

Bank and insurance company Suncorp-Metway (ASX:SUN) says bad debts have stabilised in the September quarter. The company also said the non-core should run-off in an orderly manner and it was seeing positive signs in the market regarding opportunities for divestment.

Ruralco Holdings (ASX:RHL) posted an annual net profit for fiscal 2009 of A$8.45 million, down 47 per cent on the prior year, following a general downturn in the rural services sector. The company expects overall trading conditions in the rural sector to improve in fiscal 2010 and says the company is well placed to take advantage of the uplift.