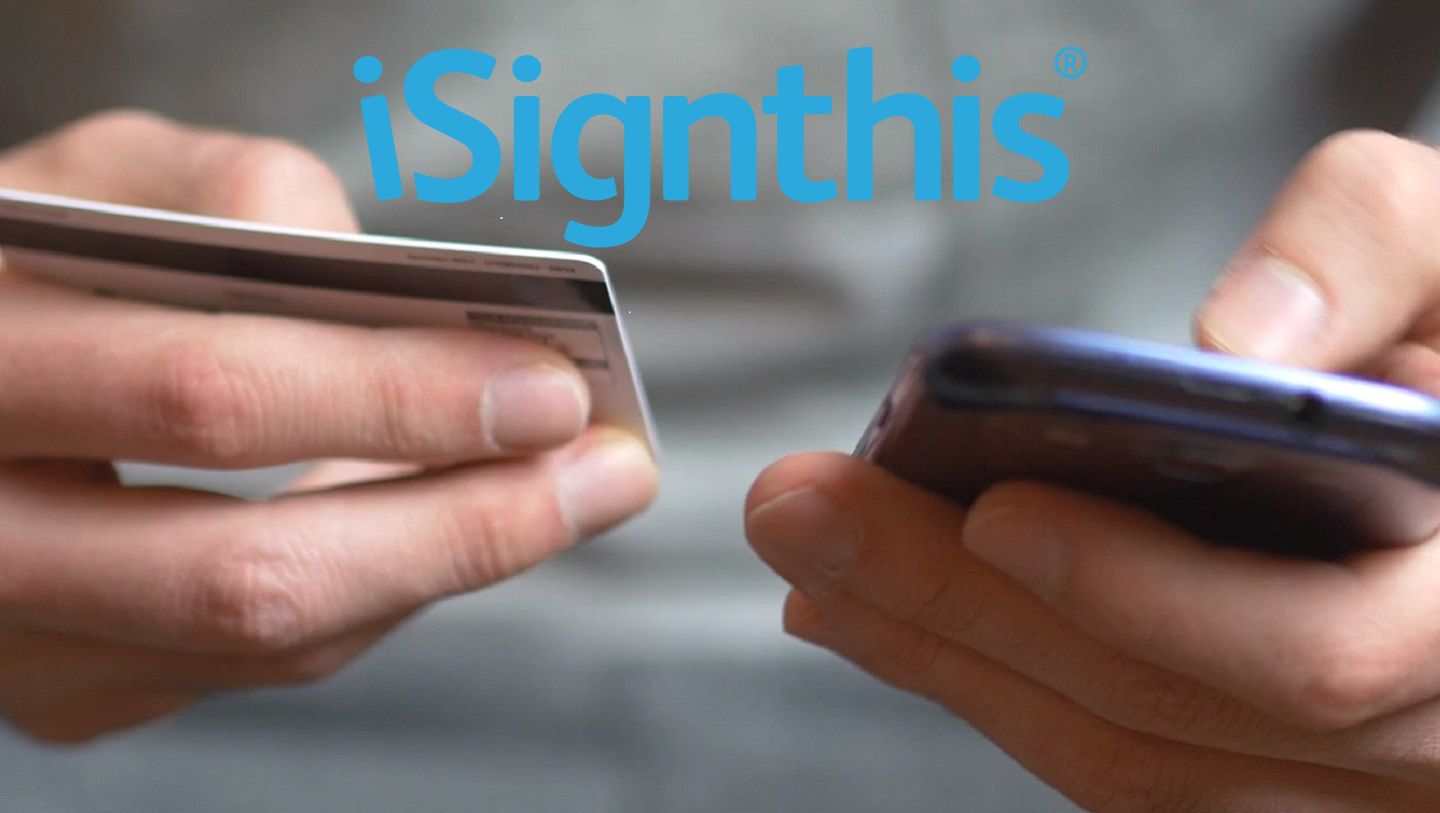 ASX:ISX) by the ASX suspension condoned by ASIC. Many shareholders have suffered severe financial hardship, which was made far worse during the course of the pandemic. iSignthis has received reports from shareholders that the suspension has meant that they have not access to significant amounts of their savings, with some unable to pay crucial medical bills, and others in severe financial distress.

On the 2nd October 2019, ISX shares were trading at $1.07 the day before, and trending upwards. The company was announced by S&P Dow Jones on the 6th September 2019 that it would be added to the ASX300 index on 23 September 2019. iSignthis had also recently announced a Visa deal for Australia, which complemented its European and other Australian principal member card scheme agreements. The Company was poised for growth, and revenues were increasing, off the back of the foundations laid during 2018.

In further court documents lodged today, ISX alleges ASX unfairly suspended it from trading in October 2019 without any justifiable basis.
Per our September 2020 announcement to the market, ISX is seeking $464 million in damages and to have the trading suspension lifted. ISX has always maintained that the suspension was unfair and without any basis.

As part of the Federal Court discovery process, ASX has disclosed crucial documents to ISX that have been the driver behind ISX updating its statement of claim (4FASOC).

Key to ISX's allegations in the 4FASOC are disclosures indicating that ASX and ASIC were determined to suspend ISX, despite the lack of evidence.

It is ISX's view that the mere "suspicions" of a market operator are not sufficient grounds to suspend trading. There are many examples of listed companies that have been the subject of suspicions/enquiries/formal regulatory investigations by ASIC and/or APRA and/or AUSTRAC that have not been suspended from quotation - for example, Crown Resorts Ltd, National Australia Bank Ltd, AMP Ltd and Nuix Ltd, and we have cited more in the 4FASOC (see paragraph 8D).

In summary, the 4FASOC alleges (paragraph 5A) that, on the morning of 1 October 2019, ASIC and ASX teleconferenced about ISX during which the following occurred.

- Tom Veidners of ASIC (Senior Manager Market Surveillance) told the meeting that ASIC's review of documents did not reveal a "smoking gun".

- ASX Chief Compliance Officer Kevin Lewis stated that ASX did not have "hard evidence" that would support a suspension of trading in ISX's shares.

- Mr Lewis also said "as much as we would like to suspend, unless ASIC gives a direction, at the current juncture we do not have sufficient evidence" and it "grates to come to that conclusion."

Based on the above, it appears that the day before ISX was suspended from quotation, ASX and ASIC acknowledged there was insufficient evidence to support suspending ISX's shares, and ASX was "spitballing".

The 4FASOC also alleges (paragraph 5D) that, on the morning of 2 October 2019, at a further teleconference between ASX and ASIC, ASIC investigator Colin Luxford indicated that ASIC "haven't commenced a formal investigation_" into ISX and that is was "ok" to refer to ASIC "enquiries" in a "release."

It is also alleged that as of the morning of 2 October 2019, ASIC had not provided ASX with any documents or evidence that could reasonably be characterised as supporting the suspension of ISX shares from trading.

At 9.05am on 2 October 2019, ASX's Senior Manager Listing Compliance James Gerraty emailed ASX Chief Compliance Officer Kevin Lewis, attaching a draft market release regarding the suspension of ISX's shares. At 9.23am, Mr Lewis sent a revised version of the draft release back to Mr Gerraty.

A draft version of the market release was circulated to ASIC's Mr Luxford and other representatives at 9.30am. At 9.40am, Mr Luxford replied that "ASIC is content with this draft."

At 9.53am, ASX suspended ISX's shares asserting "recent volatility in its share price", pending the outcome of enquiries by ASIC and ASX into the company. ISX's shares are still suspended.

The additional facts alleged in the 4FASOC (paragraphs 5A to 7A), if established at trial, reveal the cursory manner in which trading of ISX's shares was suspended by ASX on mere suspicion. This revelation would be deeply troubling and the unchecked power apparently yielded by ASX against ISX would be concerning for any entity listed on the Australian Securities Exchange. If accepted by the Court, ASX has clearly not followed due process or complied with its obligations under the Corporations Act, and ASIC officers have turned a blind eye to ASX's actions.

The drama began on 10 September 2019, when proxy advisors Ownership Matters (OM) released a 'bespoke' report alleging governance issues at ISX. The report was selectively released by OM to only a few, creating an uninformed market.

At no stage had OM contacted or spoken to anyone at ISX regarding the 'bespoke' report. Nor did it provide ISX with a copy of the report - and it still has not done so, nor corrected the report.

Off the back of this 'bespoke' report, ASX contacted ISX, which co-operated by providing information and documents as requested in response to ASX enquiries.

Despite ISX releasing a rebuttal to market, the share price plunged to around 70c from highs of $1.70, before recovering again to $1.07 off the back of the Visa agreement news. The 4FASOC alleges that ASIC acknowledged during the call with ASX on the 1st October 2019 that "the share price is stabilising". The ASX claims of "price volatility" at the time of suspension were clearly inaccurate.

During May 2019, ASIC's Financial Reporting and Audit team conducted a formal audit of ISX's books under a section 30 notice. The audit included revenue recognition, and the results of the audit were made public, via Media Releases:

1. That the revenue of the "key contracts" was properly recognised. The fact that 'revenue recognition' was reviewed was stated in the ASIC media release here:
https://www.abnnewswire.net/lnk/HNRSLP9D

Relentless and inaccurate reporting by the Australian Financial Review (AFR), which claimed that there were AML concerns in relation to ISX and its relationship with its Danish bank, of which ISX was a mere depositing customer, were pure fiction.

Visa Inc had concluded a successful onsite AML audit of ISX in November 2019, which raised no red flags. iSignthis' EU regulators had also conducted routine onsite AML and operations audits earlier that year, and did not raise any concerns.

Following the AFR fictional stories, AUSTRAC conducted queries, Mastercard conducted an onsite audit, and a number of external auditors conducted their own extensive audits. None of these audit reports raised any 'systemic' AML issues as had been claimed. No financial services or prudential regulator, anywhere, has fined, sanctioned or issued a notice in relation to ISX and its AML processes or its business activities.

iSIgnthis Ltd CEO, John Karantzis said ""On behalf of my 10,000 Australian shareholders, many of them ordinary mums, dads, pensioners and young investors - I am outraged by the callous action of the ASX. The ASX has completely disregarded iSignthis shareholders in pursuing their own misguided and misconceived agenda, designed to suspend and hurt the company, its shareholders, executive, customers and partners."

"The ASX was aware of the "major litigation risk" it would be bringing upon itself, but clearly weighed that up against the strategic advantages of suspending ISX and muddying the Company's reputation with its unfounded assertions. ASIC involvement in this sordid affair should also come under scrutiny. Australians deserve full transparency on this matter."

The full Amended Statement of Claim is available from:
https://abnnewswire.net/lnk/7GUQY2H3

By converging payments and identity, iSignthis delivers regulatory compliance to an enhanced customer due diligence standard, offering global reach to any of the world's 4.2Bn 'bank verified' card or account holders, that can be remotely on-boarded to meet the Customer Due Diligence requirements of AML regulated merchants in as little as 3 to 5 minutes. Paydentity(TM) has now onboarded and verified more than 1.5m persons to an AML KYC standard.

iSignthis Paydentity(TM) service is the trusted back office solution for regulated entities, allowing merchants to stay ahead of the regulatory curve, and focus on growing their core business. iSignthis' subsidiary, iSignthis eMoney Ltd, trades as ISXPay(R), and is an EEA authorised eMoney Monetary Financial Institution, offering card acquiring in the EEA, and Australia.

ISXPay(R) is a principal member of Mastercard Inc, Diners, Discover, (China) Union Pay International and JCB International, an American Express aggregator, and provides merchants with access to payments via alternative methods including SEPA, Poli Payments, Sofort, PRZ24 and others. 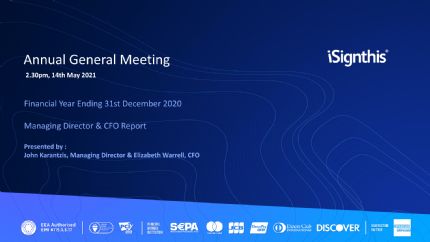 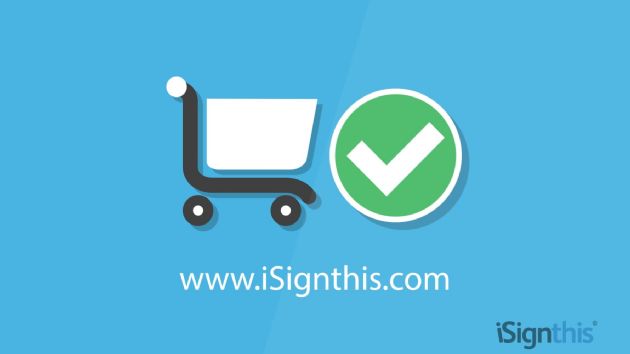 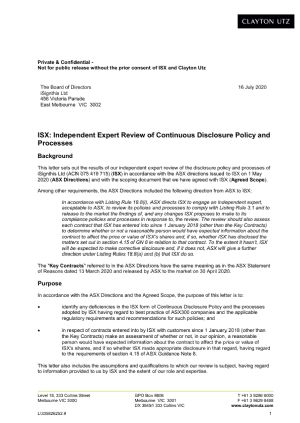