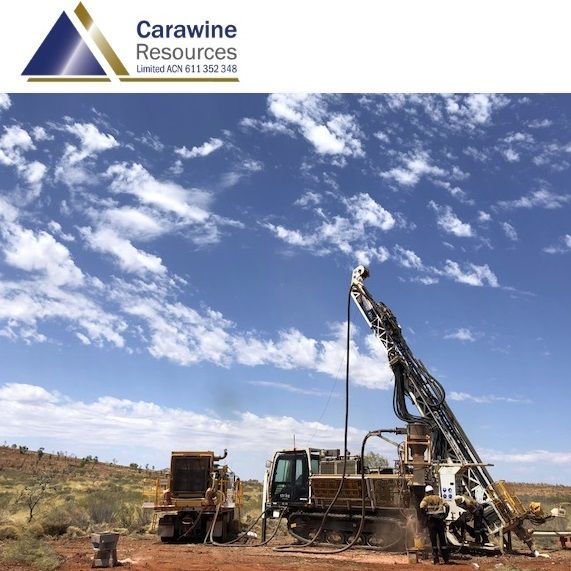 ASX:CWX) is pleased to announce compelling new geochemical evidence for a copper-gold porphyry source of mineralisation at its Hill 800 deposit, part of the Company's 100%-owned Jamieson Project in northeast Victoria.

Hill 800 is the most advanced prospect at the Jamieson Project, with drilling to date returning outstanding widths and grades of gold and copper mineralisation from intensely altered volcanics, including:

Today's announcement relates to the analysis of multi-element geochemical data from 19 diamond drill holes completed by the Company at Hill 800. The analysis, by renowned expert Dr. Scott Halley, provides strong geochemical evidence that a copper-gold porphyry intrusion may be the source of mineralisation at Hill 800 (Figures 1 to 3; Tables 1 & 2, Appendix 1 in link below).

*All tables and figures can be viewed via the link below.

Carawine Managing Director Mr David Boyd said this was another exciting development for Hill 800 and the Jamieson Project, one that could lead to a major new discovery in the region.

"Earlier this year we established a new interpretation for the Hill 800 mineralisation, demonstrating the potential for high-grade mineralisation to continue at depth beneath the current limit of drilling.

"These latest results strongly suggest a fertile copper-gold porphyry is driving the mineral system at Hill 800 and its surrounds. Combined with our regional target generation work, this new evidence gives us confidence that we could be chasing a porphyry copper-gold target at depth beneath Hill 800, and potentially at Rhyolite Creek as well.

"Porphyry deposits are very attractive targets given they are typically very large mineral systems with multiple deposits and excellent grade characteristics. We are now designing an exploration program to define the geometry and depth of the porphyry targets, so that they can be drilled during the next drilling campaign. This is planned to commence in Q4 2019, following the release of the Company's first Mineral Resource for Hill 800."

Following the announcement of five new regional prospects, and recognition of the potential for deep magmatic systems at Jamieson from regional magnetic data (refer ASX announcement 15 July 2019), the Company approached Dr Scott Halley from Mineral Mapping Pty Ltd to provide an analysis of multi-element data from Hill 800. Dr Halley is widely recognised as an expert in the field of geochemistry and has consulted to more than 100 mining and exploration companies in more than 25 countries.

1. The gold-mineralised zone at Hill 800 has a strong gold (Au), tellurium (Te), bismuth (Bi) and selenium (Se) association which is most like that of magmatic fluids originating from a copper-gold porphyry intrusion (referred to as a "fertile" porphyry).

Typical values of these pathfinder elements observed in higher levels above fertile porphyries are in the order of Te > 1 ppm, Bi > 1 ppm and Se > 4 ppm (Figure 1). At Hill 800, the data show significantly elevated values for these elements (Figure 2, Tables 1 and 2, Appendix 1):

It is therefore expected that mineralisation will continue at depth, with the pathfinder metal assemblage changing as the system becomes deeper and hotter. It is also likely that the system will contain more copper and/or molybdenum (Mo) associated with the gold mineralisation.

2. The mineralised intercepts drilled to date at Hill 800 are very strongly controlled by rock type. Although the intensity of the alteration makes it difficult to visually distinguish primary rock units, the rocks can be geochemically fingerprinted. The geochemical fingerprinting of the rock types shows that most of the gold intersected to date occurs within the rock unit geochemically classified as rhyodacite (Figure 3b).

4. Primary Porphyry copper-gold magmas are invariably magnetic. There is a high-intensity magnetic anomaly at depth below Hill 800 (Figure 4), and therefore a reasonable probability that this is highlighting the source of the preferentially mineralised rock at Hill 800. This magnetic feature is a high priority exploration target, with the style of mineralisation more likely to be porphyry Cu-Au-Mo rather than the Au-Te-Bi intersected closer to surface (e.g. Figure 1).

Hill 800 is therefore best classified as a volcanic-hosted semi-massive sulphide deposit formed in a sub-sea floor environment above a fertile porphyry intrusive system. Interaction of hot porphyry-derived mineralising fluids and cold seawater is the mechanism most likely required to generate the observed geochemical data and mineral assemblage at Hill 800. Higher-grade gold and copper mineralisation at Hill 800 (previously described as "stringer" mineralisation) is most likely the result of local remobilisation during later regional metamorphism during the Devonian Tabberabberan orogeny.

The geochemical evidence summarised above supports the interpretation of the mineralisation at Hill 800 being sourced from, and related to, a fertile copper-gold porphyry intrusion at some distance from the deposit. Porphyry deposits are considered attractive exploration targets given they are typically large, can contain economic concentrations of copper and gold, and commonly occur as multiple deposits. Australian examples include Cadia Valley (Newcrest Mining) and Northparkes (CMOC) operations in New South Wales.

A key targeting feature for gold-copper porphyry deposits is the biotite-magnetite alteration associated with the potassic zone, which therefore commonly appears as an anomaly in magnetic (geophysical) survey data.
As previously reported, two broad magnetic anomalies are recognised from regional-scale airborne magnetic data at the Jamieson project, one beneath the Rhyolite Creek prospect area and another, stronger one beneath the Hill 800 prospect area and surrounds (Figure 4) (refer ASX announcement 15 July 2019).

These magnetic anomalies could be associated with the potassic zone of copper-gold enriched porphyries. Modelling of the magnetic anomalies at Hill 800 by the Company's geophysical consultants SGC indicate the presence of multiple magnetic bodies with depths to the tops at between 200m and 600m below surface. However, as the models are based on regional scale data a more detailed survey is required to refine these models with enough accuracy to effectively target drill holes. This detailed work will form part of the Company's upcoming exploration program planned to begin during Q4 2019.

The Company has also recently acquired granted exploration licence EL6622 at nil cost, immediately adjacent and to the west of tenement EL5523. EL6622 was granted on 30 July 2018 for a period of five years and was transferred to Carawine on 22 August 2019. The tenement includes Cambrian-aged volcanic rocks, expanding Carawine's coverage of the main host stratigraphy and providing flexibility in managing the Jamieson Project tenure (Figure 6).

A partial reduction of EL6622 is currently being processed by the Victorian Department of Jobs, Precincts and Regions - Earth Resource Regulation, and is due for completion by the end of September 2019. Figure 6 shows the extent of EL6622 following completion of the reduction.

At the Company's Paterson Project, located in the Paterson Province of Western Australia, tenement E45/5326 "Lamil Hills" was recently granted for a period of five years from 21 August 2019. Lamil Hills is 25km northwest of Telfer and surrounds Encounter Resources' (

Lamil Hills was applied for prior to the significant increase in exploration and tenement activity witnessed in the region in recent times. The Company is actively reviewing historic exploration on the tenement with a view to generating targets for future exploration work.

There remains strong interest in the Paterson province and Carawine's large 100%-owned tenement position within the district. Carawine will consider all options for its Paterson project, including progressing exploration programs in its own right, and/or possible joint venture opportunities.

ASX:IGO) "IGO" Nova nickel-copper-cobalt deposit at its southern end, and to the north the Tropicana gold mine (a Joint Venture between Anglogold Ashanti and IGO) (Figure 8).

Big Bang is located in the Central Fraser Range, where a number of Companies have recently announced nickel and gold discoveries including Thunderstorm - a paleochannel gold prospect identified by IGO (in joint venture with Rumble Resources (

Carawine has a joint venture with IGO for its other granted tenements in the Fraser Range (the "Fraser Range JV"). IGO currently hold a 51% interest and can earn an additional 19% interest in the tenements by spending $5 million by the end of 2021. Big Bang was applied for after the commencement of the Fraser Range JV and is held 100% by Carawine.

Carawine Resources Limited (ASX:CWX) is an exploration company whose primary focus is to explore for, and ultimately develop, economic gold, copper and base metal deposits within Australia. The Company has four gold, copper, cobalt and base metal projects, each targeting high-grade deposits in well-established mineralised provinces throughout Australia. 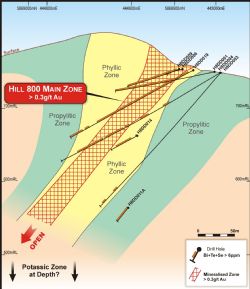 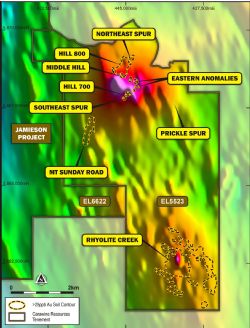 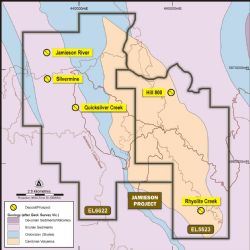