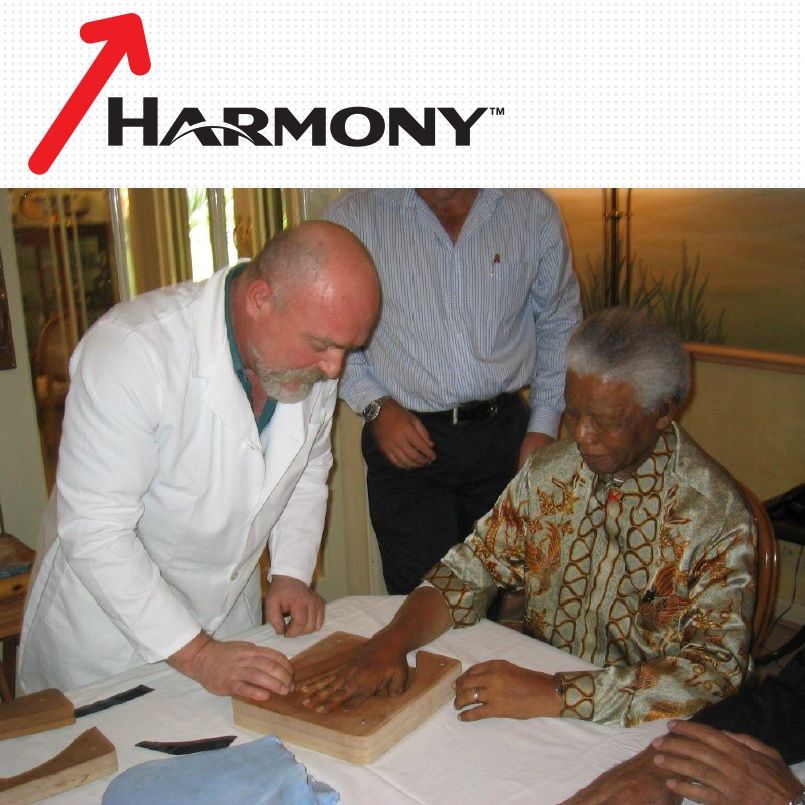 Calgary Man to Sell the Only Solid Gold Replicas of Nelson Mandela's Hands Cast
New York, Jan 25, 2018 AEST (ABN Newswire) - Malcolm Duncan, a South African businessman now living in Calgary, is planning to sell a unique collection of gold artifacts including a life size impression of the great man's hand and another of his fist cast in solid gold by Harmony Gold (JSE:HAR) (

NYSE:HMY), one of the world's leading gold producers in South Africa.

The artifacts were cast in 2002, 12 years after Nelson Mandela was released from prison.

Malcolm Duncan, who knew Mandela, said that Harmony's intention was to make one full set of gold artifacts consisting of a fist, a full hand and a palm impression of Mandela's right hand, for each of the 27 years Mandela spent behind bars.

Mr. Duncan knew Mandela having contributed to a breast cancer clinic which Nelson Mandela had opened in Soweto. He was given the opportunity to buy the valuable gold artifacts as long as he donated an equal sum to charity appointed by Mandela. Malcolm donated the specified amount through Harmony Gold to a charity.

He purchased the sets dedicated to 1964 and 1990, marking the year Nelson Mandela was incarcerated and the year he walked out of the Pollsmoore prison gates a free man.

Mr. Duncan had deep admiration for Mandela and was keen to secure the valuable memorabilia. In a speech marking his purchase, Duncan said, "This is a man that came out of prison with no bitterness and, although he had very little, he did so much to better the lives of the underprivileged people always clear and concise and he never incited racial aggression. I believe these hands represent the peaceful manner in which racial injustice can be resolved and a dysfunctional social system can be turned into one of social harmony."

Of the 27 planned sets of gold artifact, each representing one year of imprisonment, only one complete set representing 1990, was cast by Harmony Gold. An incomplete set for 1964 also exists, however, it only consists of a hand and a fist. Malcolm is in possession of the complete 1990 set and the 1964 fist. The 1964 hand was retained by Mandela's lawyer who subsequently put a halt to the future sales of numerous pieces of art that capitalized on Mandela's name.

The hands, however, have never been available for sale to the general public and Malcolm obtained them only through a sizeable donation to a charity handpicked by Mandela.

Malcolm has numerous photographs that show how intimately involved Mandela was in this project. The pictures depict him patiently sitting while the casts were taken at his home in Houghton, Johannesburg. An interesting fact about that day is when it came to casting the fist, Mandela insisted on placing his thumb next to his fingers as opposed to in front. He deemed this a less aggressive representation of his victory over apartheid.

The gold casts in Malcolm Duncan's possession are protected in elaborate boxes with brass plaques confirming the weight and purity of the gold. The set of 3, representing 1990, weighs almost 20 lbs and is 99.99% solid gold. The 3 boxes contain plaques with identical essays describing the momentous events of that year when Mandela was released from prison, while the 1964 boxes have plaques with essays describing his Rivonia trial.

A bronze sculpture of Mandela's hands sold at auction for US$2.25 million while he was alive. This, however, was an artist's representation of the real thing, as opposed to Malcolm's pieces which are authentic solid gold casts of Mandela's hands and carry the weight of his full cooperation and involvement. He is now seeking to sell them to a private or corporate buyer or perhaps a museum who appreciates their importance as symbols of racial unity and the fight against intolerance of any kind.

The artifacts come complete with a letter of authenticity from Harmony Gold. Obtaining it was no mean feat. After extensive communication, Malcolm was able to get the management at Harmony Gold to go back in their records 15 years prior and issue a letter that unequivocally states that the hands were cast by Harmony Gold, that they were made with Mandela's full knowledge and cooperation while he was alive and that they are indeed the only ones ever produced.

Expressions of interest to acquire the "golden hands" of Nelson Mandela can be directed to the contact person below.

Harmony Gold Mining Company Limited (JSE:HAR) (NYSE:HMY), a world-class gold mining and exploration company, has operations and assets in South Africa and Papua New Guinea (PNG). Harmony, which has more than 60 years’ experience in the industry, is the third largest gold producer in South Africa. Our assets include one open pit mine and several exploration tenements in PNG, as well as 9 underground mines and 1 open pit operation and several surface sources in South Africa. In addition, we own 50% of the significant Golpu project in a joint venture in PNG.

The company's primary stock exchange listing is on the JSE with a secondary listing on the New York Stock Exchange. The bulk of our shareholders are in South Africa and the United States. Additional information on the company is available on the corporate website, www.harmony.co.za

Link: Calgary Man to Sell the Only Solid Gold Replicas of Nelson Mandela's Hands Cast During His Lifetime