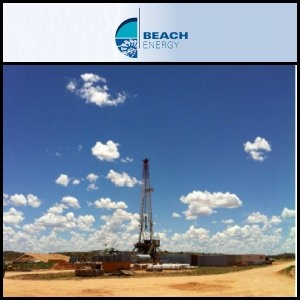 Fracture stimulation activities were undertaken in PEL 218 in the Holdfast-2 horizontal well with nine stages placed. Six of the nine stages were placed as designed, with three stages curtailed due to high treating pressures. Four stimulation stages were also placed in Dashwood-1 to test the lower Patchawarra Formation as part of the exploration strategy for the area. The Dashwood-1 well is currently being cleaned out by coiled tubing which will move to Holdfast-2 shortly to complete clean out activities there. Both wells will be flow tested at the completion of clean out activities.

The Geoffrey-1 vertical exploration well in ATP 855 (Beach 46.9% and operator, Icon Energy Ltd 35.1%, Chevron 18%) is currently drilling ahead at 3,979 metres in the Patchawarra Formation. The well is planned to drill to a maximum depth of approximately 4,250 metres.

A three well oil development campaign commenced in the 100% Beach fields of southwest Queensland. Kenmore-42 was plugged and abandoned, while Kenmore-43 was cased and suspended as a future Birkhead Formation oil producer. The rig is currently drilling Bodalla South-21 as a deviated development well.

In the gas exploration program in Queensland (Beach 23.2%, Santos Ltd (Santos) 60.06% and operator, Origin Energy Resources Ltd (Origin) 16.5%, Australia Pacific LNG (APL) 0.24%), the Kaiden-1 well was drilled to total depth of 3,094 metres and cased and suspended as a Paning Member and Toolachee Formation gas discovery. The Marama West-1 well (Beach 23.8%, Santos 61.2%, Origin 10%) is drilling ahead at 300 metres and is the third well of a three well gas exploration program consisting of Bolah-1 and Kaiden-1, both of which are gas discoveries.

In the gas development program in Queensland (Beach 23.2%, Santos 60.06% and operator, Origin 16.5%, APL 0.24%), the Barrolka-11 well is drilling ahead at 858 metres and setting casing. Barrolka-1 is the first well of a three well program on the Barrolka Field targeting the Toolache Formation.

Drilling continued in the five well Zeus-Minos-Tennaperra oil development campaign in southwest Queensland (Beach 30%, Santos 70% and operator). Since the last report, the second and third wells of the campaign, Zeus-8 and Zeus-9, were drilled, with both cased for future production. The fourth well, Minos-2, reached total depth of 1,783 metres with logging operations currently underway.

In the South Australian Cooper Basin Joint Venture (SACB JV) (Beach 20.21%, Santos 66.6% and operator, Origin 13.19%) gas development program, the Kurunda-6 well was drilled to a total depth of 2,523 metres and cased and suspended as a Patchawarra Formation gas producer.

Big Lake-95, the first of five planned wells on the Big Lake well pad, was drilled to a total depth of 3,126 metres and is preparing to run production casing.

In the SACB JV unconventional gas appraisal program, the Roswell-2 horizontal well in the Roseneath Shale was drilled to a total depth of 3,481 metres and is currently setting casing. Roswell-2 is expected to be stimulated and downhole microsiesmic monitoring is planned at the Roswell-1 vertical well.

El Salmiya-3 spudded on 8 November 2103 and is currently drilling ahead in the Cretaceous Khoman Formation. The well is designed as an appraisal of the oil discovery from July this year in the lower Cretaceous Kharita Formation. Secondary objectives will be to appraise the Abu Roash and Bahariya discoveries. 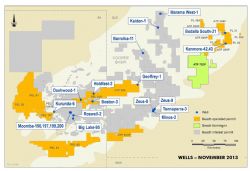 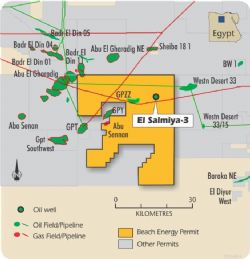 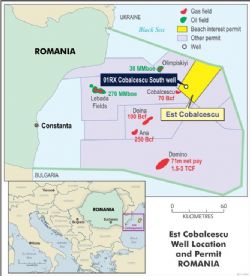