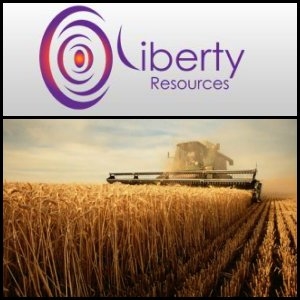 Super Funds Urged to Redirect Investment Into Expansion of Unconventional Gas Sector On The East Coast of Australia
Perth, April 11, 2013 AEST (ABN Newswire) - Australia's superannuation funds have been urged to redirect as a priority, their investment attitudes and deposits into a higher participation in emerging new unconventional gas projects along Australia's east coast.

Perth-based Liberty is behind a proposed new A$1.4 billion gas plant for central Queensland based on a gas feedstock derived from the now third generation and more advanced and environmentally friendly technologies for accessing unconventional gas trapped in deep and unminable coal seams.

"If one took a realistic view of the onshore and international appetite for funding new energy supply projects in Australia, it would be hard to go past the locked up potential of Australia's super funds," Liberty Managing Director, Mr Andrew Haythorpe, said today.

"These funds are holding vast amounts of money, and one would suggest in the current equities environment, earning low or no interest," Mr Haythorpe said.
"They have a significant portion of their assets 'parked safely' in low yielding government bonds at a time government, gas suppliers and industrial and domestic gas consumers collectively face the dire prospect of rising gas and energy prices in the immediate years ahead.

"Yet, while there is some justification in the more intense but somewhat johnny-come-lately public and government scrutiny of existing and proposed coal seam gas production projects in Queensland and New South Wales, much of these use technologies are now surpassed by the emerging third generation of unconventional gas - what we at Liberty call "UGas3".

"Critically, these new era unconventional gas projects have the potential to meet super funds' criteria for financial and investment sustainability while delivering the funds' obligations to meet public expectations of social and environmental accountability in their investment activities and performance."

He said UGas3 could operate at far greater depth, down to 1.5 kms, than conventional existing coal seam gas operations, could recover 25 times more energy per area than CSG, and could produce gas at much lower cost, including lower electricity from UGas3 fuelled turbines.

Critically, UGas3 could use undrinkable surface saline groundwaters for injecting into the coal seams, there were no chemicals involved, and the technology accessed seams beneath the cap rock rather than above it, ensuring the sequestration rather than return to surface, as in CSG operations, of any remnant salt content.

Shale gas not the full answer

Mr Haythorpe said Queensland's current gas demand of around 240 petajoules faced a 10-fold increase in the amount of gas that has to be produced in that State as LNG projects come on stream over the next three years - a market pressure point reinforcing the need for the market to access fresh capital via Australian superannuation funds and the growth opportunity for UGas3 suppliers.

He said while new shale gas projects were a welcome development in Australia's energy quarter, its challenges included the location of the reserves, the number of rigs in Australia suitable for the specialist shale gas drilling requirements, the longer lead times in well completion and hook up, and import delays on new rigs.
Liberty - which has specialised in identifying and acquiring coal reserves that coal miners and gas companies have either overlooked or missed - plans to develop its gas plant in the broader Injune area as a stand-alone development initially but still proposes an eventual world-first $4 billion integrated low cost gas, electricity and fertilizer complex, using UGas3 reserves.

World trading powerhouse and Japanese conglomerate, Marubeni Corporation, has already signed a Letter of Intent with Liberty re the Australian developer's urea and ammonia proposals.

Liberty's technology does not require fraccing as used in CSM, and injects saline water and oxygen into coal seams to generate natural hydrogen-enriched Syngas to bring to surface from unminable coal seams across the Company's large tract of tenements stretching in a corridor between Goondiwindi and Longreach. The bulk of the acreage is on non-farming State-held land.

The surface plant would be able to process the UGas3 to both pipeline and LNG specification gas at estimated costs of A$4.50 a gigajoule compared to current industry peer forecasts of $9GJ.

Liberty's Denison project has an Inferred coal resource of 846 million tonnes (Mt) with early work pointing to a production of 1000PJ of raw Syngas per every 100Mt of coal or the equivalent of just under 900PJ per 100Mt of coal when upgraded to pipeline specification gas.

LIBERTY RESOURCES (ASX:LBY) (PINK:LYRTF) (FRA:LG4) is committed to developing its large, low cost gas and fertiliser Project in Queensland. We use standard directional drilling to access deep coal, and we apply the latest environmental techniques to inject (saline) water and oxygen to produce low cost fertilisers. Benefits from our Project will include reduction of surface salinity, lower cost of living for remote locations, skilled and professional jobs, low cost gas and electricity and exports – fertiliser and gas.