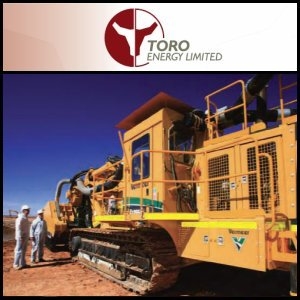 ASX:TOE) is pleased to report the successful and exclusive application for exploration tenement E80/4747 in the Lake Mackay region of Western Australia, incorporating the Pokali Copper Prospect.

Until recently, this prospect was an advanced exploration project owned by Ashburton Minerals Limited (

ASX:ATN) and includes broad intersection of low-grade 'IOCG-style' mineralisation, such as 246 m at 0.22% Cu, including 12 m at 1.1% Cu. The former licence area became available recently due to the unanticipated expiry of its six-year term.

Toro is pleased to obtain uranium rights to this tenement, but does not consider the copper project a core asset and as such has undertaken negotiations with the former owner, ATN, to farm out the non-uranium rights for the tenement. In return, Toro will secure exploration access to an adjoining Ashburton tenement, E80/3920, which has significant uranium potential. The key terms of the farm out as set out in a formal Heads of Agreement ('HoA') are:

In addition to the HoA outlined above, Toro believes there is potential for a broader-commodity exploration program over Toro's Lake Mackay tenements, in light of exciting discoveries in the greenfields Fraser Ranges to the south. Toro has previously highlighted the intrusive-related nickel potential of the Pokali area.