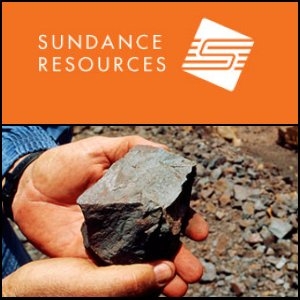 ASX:SDL) is pleased to advise that it has entered into a Memorandum of Understanding with Core Mining Limited ('Core') concerning the provision and use of future infrastructure facilities which would service Sundance's Mbalam/Nabeba Iron Ore Project.

Core is a regional West African iron ore developer that owns the Avima project which is located approximately 65 kilometres West of Sundance's Nabeba deposit in the North West of the Republic of Congo in the Sangha region, and approximately 42 kilometres to the South of Sundance's proposed rail infrastructure. Core is a private company incorporated in the British Virgin Islands. In 2011 it announced that Glencore International AG had invested in Core and other investors include the Russian resources company Severstal.

The Definitive Feasibility Study on Sundance's Mbalam/Nabeba project was completed in March, 2011. The project is designed to produce 35 million tonnes a year of Direct Shipping Ore (DSO)- quality Hematite for approximately 10 years. Sundance will then proceed with development and production of the Itabirite deposits. Sundance currently plans to transport the products from the deposits located in the Republic of Congo and Cameroon via a dedicated rail line to a custom-built iron ore export terminal at the Port of Lolabe in Cameroon, both of which are proposed to be constructed by Sundance.

Core has informed Sundance that it is working towards finalising the resource definition phase of the Avima Project. Core has indicated it is targeting a similar production capacity to Sundance's Mbalam/Nabeba Project.

As part of the MoU, Sundance will advance its discussions with Core regarding the potential for Core to access the Mbalam infrastructure by way of direct investment or alternatively by a haulage services agreement. Sundance and Core will also advance their discussions concerning other possible infrastructure solutions.

Sundance Chairman George Jones said the collaboration with Core was further evidence of the commitment both companies have to developing a new world-class iron ore region in central West Africa.

"It makes a lot of sense for Sundance and Core to work together given we operate near each other and both have projects with high-quality iron ore assets. Once in production, there is the potential to produce up to 70 million tonnes per annum of DSO just from our two projects alone. "Once you consider all the additional resources in the surrounding area that may also come on stream, I believe the long-term potential of this region could be up to 100 million tonnes per year or more. However, for this to be achieved, the fundamental requirement will be access to dedicated, heavy haulage infrastructure for the export of iron ore."