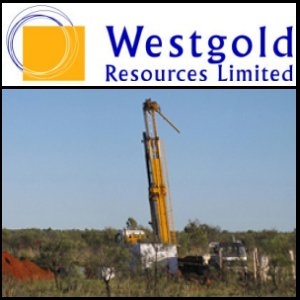 ASX:WGR) is pleased to advise that it has completed its maiden resource estimate for its newly discovered Jim's Find prospect:

Westgold believes it has now defined the drivers to mineralisation in this area and its geological reviews have identified a further eight new targets considered to have the potential to host mineralisation similar to that at Jim's Find.

Importantly, the discoveries in the City of Chester area are near-surface oxide type and amenable to open-pit mining. Westgold has commenced mining optimisation studies as part of its overall Central Murchison Gold Project.

Additionally, as part of its review of the open-pit potential of the Cuddingwarra district, Westgold has begun to evaluate the southern parts of the Cuddingwarra shear and is pleased to advise that drilling has returned shallow high grade results from the Lady Rosie Prospect:

The Lady Rosie prospect which has no identified mineral resource was previously the subject of widerspaced drilling during the late 1990's and early 2000's. The Lady Rosie prospect is located immediately along strike from the Black Swan South open pit at Cuddingwarra. Black Swan South is the most prolific producer in the Cuddingwarra area with recorded production in excess of 250,000oz.

Westgold will undertake an infill drilling campaign as part of its 2012 resource definition program (commencing in January).

Westgold Managing Director Scott Huffadine said "the resource upgrade in the City of Chester area and the recent exploration success from other areas within our overall Central Murchison Gold Project highlights the underlying potential the area has to turn up additional mineralisation outside of the known historical mines. This further underpins the capacity for growth beyond the Company's current development plans."

Please view the following link for the complete announcement including figures and tables:
http://media.abnnewswire.net/media/en/docs/ASX-WGR-569289.pdf