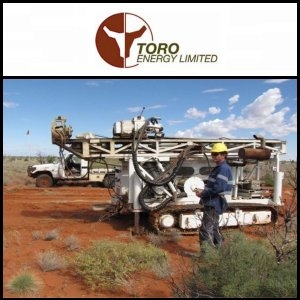 PINK:TOEYF) Western Australian Wiluna uranium project by 2013 into the State's first modern-era uranium mine is to be managed by a former Woodside (

Dr Guthrie will have responsibility for managing the advanced approvals processes, negotiations and development of the proposed A$270 million mine as it goes through final State and Federal Government regulatory and approvals processes, including public consultations, and overseeing the establishment of the Wiluna Project's infrastructure, processing facilities, commissioning and maiden U3O8 production.

Her academic background includes a Graduate Diploma in Business Management, a Bachelor of Science with Honours, a Doctor of Philosophy (Geology), winner of an Australian Institute of Nuclear Science and Engineering post-graduate scholarship, and recipient of a six month Fellowship with France's Commissariat a l"Energie Atomique. Dr Guthrie was a former Director of uranium explorer, Nova Energy, and currently holds Board positions on the International Centre for Radioastronomy Research, University of WA's Centre for Social Impact Advisory Board and Scotch College.

Most recently, she was Chief Executive of Wellard Enterprises, a group which in part provides communications, control systems and consultancy services to mining, port and infrastructure providers in Western Australia, Queensland and throughout South East Asia.

Welcoming the appointment, Toro Managing Director, Mr Greg Hall, said Dr Guthrie had a distinguished career record in the resources sector and across the range of key project skills which are applicable to Wiluna's transition from approval, through development to a commercial mining operation.

"There is now considerable momentum behind our Wiluna Project and because it has an obvious leadership position in the new WA uranium exploration and mining space, it is imperative that Toro delivers this transition in a highly transparent and world's best practice manner," Mr Hall said.

"Dr Guthrie's substantial hands-on mining and development approvals experience will help underpin the scheduled delivery in 2013 of the Wiluna Project as a commercial uranium mine and as a new Australian entrant providing uranium supply for existing and emerging global nuclear power plant demand," he said.

The Company in March formally lodged its draft Environmental Review and Management Programme (ERMP) with the Environmental Protection Authority (EPA) of Western Australia, which is leading the government assessment of the project under a bilateral agreement between the Western Australian and Federal Governments.

The current approvals process requires that once government is satisfied that Toro's documentation meets the guidelines set by government for the ERMP's preparation and suitability for public exhibition, the documentation will then be open for public comment for 14 weeks. This is anticipated, subject to Government approval, during the third quarter of 2011.

During this period, individuals and organisations will be able to make submissions to government about the project.

At the conclusion of public submissions, Toro will submit answers to public matters raised, with those answers then assessed by the EPA.

The EPA will then make final recommendations to Government for consideration of, and ruling by, the respective WA and Federal Ministers.

Mr Hall said that subject to Government approvals and satisfactory progress of the ERMP process, Toro hoped to be in a position by mid-2012 to take the Wiluna project to its Board for final investment decision ahead of a planned start to mine construction late next year and commissioning in 2013.