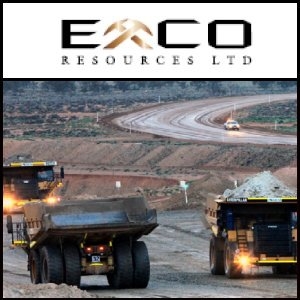 The Proposal is subject to conditions precedent, including Exco shareholders approving the transaction, Xstrata receiving FIRB and all necessary Queensland government approvals, the assignment of certain third party agreements that are ancillary to the tenement package comprised within CCP on terms that are acceptable to Xstrata, acting reasonably, and the eligible directors of Exco unanimously recommending that Exco shareholders approve the Proposal to Xstrata for A$175 million.

The APA contains other terms and conditions that are not unusual for a sale of this nature, including undertakings by Exco and various warranties, including in relation to title, due authorisation and disclosure materials provided by Exco to Xstrata.

A summary of the key terms of the APA will be included in the explanatory material to accompany the notice of meeting.

Immediately completion of this transaction, Exco's assets will include:

- Approximately A$220 million in Cash: Based on the proceeds from the Proposal, existing cash reserves and forecast cash flow from White Dam, Exco is expected to have a cash-backing of A$220 million, equivalent to A$0.62 cents per fully diluted share.

- Hazel Creek Project: Exco will be well funded for a major programme of work at the new discoveries made last year at Hazel Creek, where results have shown the existence of large areas of copper-gold-magnetite mineralisation with potential to define large tonnage, open-pit style deposits.

- White Dam Gold Joint Venture (Exco 75%): Located in South Australia approximately 80km from Broken Hill, Exco and its joint venture partner, Polymetals Mining Limited, delivered the White Dam Gold Mine with the first gold pour in April 2010. The project has repaid financing and recouped its capital cost in less than 10 months and has generated net pre-tax operating cash flow to Exco of $38 million to the end of March 2011. White Dam is expected to produce a further 40koz (Exco share 30koz) from the remainder of the current reserve with good potential for additional resource extensions. Exco and Polymetals have access to over 700km2 of granted exploration tenements surrounding White Dam.

- Great Australia Royalty: A royalty over the sulphide ores under the Great Australia Mining Lease in Cloncurry, which is being mined by CopperChem Limited pursuant to the terms of the Exco-CopperChem Alliance Agreement entered into in September 2009. Based on prevailing LME copper prices (US$4.20/lb) and the current estimated 1.7 million tonnes of ore, it is expected that the royalty can generate gross cash to Exco of around A$30 million over the next 4 years.

- Other Cloncurry Exploration Projects: A tenement package of approximately 2,400km2 in the Cloncurry region which is highly prospective for further copper discoveries. Exco will be well funded to undertake proactive and targeted exploration / resource development programs across a range of established prospects including the Pumpkin Gully Projects, and is confident it can replicate the success of the CCP in identifying a new portfolio of resources. The focus will be on developing further high grade resources, at key targets including Salebury, Fisher Creek and Tanbah.

The focus of Exco following implementation of the Proposal will be to apply its funding and management expertise in adding further value to the continuing assets, and to actively seek appropriate asset acquisition opportunities.

The Board believes the value realised under this Proposal offers a greater return on equity to shareholders than pursuing the project as a stand-alone development, with the consequent cost of further equity and debt capital raisings, as well as the exposure to development and market related risks.

The cash delivered under this proposal, in addition to other cash flows, will allow Exco to make a substantial return to shareholders, many of whom have been patiently waiting for such an outcome for many years.

The cash retained by the Company allows a major exploration effort at the Company's other projects, particularly Hazel Creek, where there is good potential for further discoveries of a scale that may exceed the value created to date through the Companies development of the Cloncurry Copper Project.

"Completion of the Proposal will be a transformational event for the Company as it will realise significant value for Exco shareholders. The Company has been very focused on growing the Cloncurry Copper Project and the proposed sale to Xstrata will provide a substantial return on investment for the benefit of all shareholders.

The Proposal will enhance Exco's ability to focus on growing its continuing asset base and reviewing and implementing an appropriate acquisitions strategy."
Indicative Timetable

Exco will shortly issue a notice of meeting to seek shareholder approval for the Proposal. At this stage it is anticipated that the shareholder meeting will occur in early June

The notice of meeting will include an explanatory memorandum to provide shareholders with an assessment of the Proposal and the reasons for your Directors' recommendation.

For the complete Exco announcement including figures and tables, please view the following link:
http://www.abnnewswire.net/media/en/docs/538268.pdf