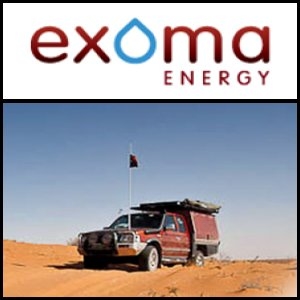 NYSE:CEO) whereby CNOOC, upon receipt of all the necessary regulatory and government approvals, will acquire a 50% interest in each of Exoma's five Galilee Basin permits for the exploration of coal seam gas and shale gas. In addition, CNOOC will have the right to acquire 86,687,666 shares at a price of 31.5 cents per share. The Agreement is in-line with Exoma's long term vision of exporting liquefied natural gas to various markets within Asia.

TSE:MOL) has received a loan commitment letter from China Development Bank for up to US$250 million, which will be applied toward half of the planned US$466 million Finance Facility for the development of the Spinifex Ridge Molybdenum/Copper Project in Western Australia. Moly Mines's major shareholder Hanlong Mining Investment Pty Ltd also advised that it expected to receive a loan commitment letter from China Export and Import Bank for the remaining half of the finance facility after Chinese New Year.

ASX:KDR) reported encouraging results from Phase One drilling program at its 100% owned Blind Calf Project in central New South Wales. The program has confirmed significant near surface mineralisation, returning 18m at 2.09% Cu. Phase Two drilling program is scheduled to commence in February 2011 to further define the extent of this mineralisation.