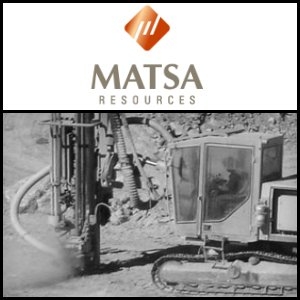 SHA:600110) confirming China Kinwa's intention to enter into a binding Memorandum of Understanding to jointly develop Matsa's flagship Norseman Gold Project in Western Australia. The project currently has a total Mineral Resource of 26.5 million tonnes at 1.7g/t for 1.47 million ounces of gold. According to the Letter of Intent, China Kinwa will acquire a 50% interest in the Project and both parties will contribute to a feasibility study to establish a gold mining operation and/or combined gold/magnetite mining operation. China Kinwa will also assist in the procurement of an off-take agreement for any magnetite iron ore concentrate produced from the Project.

ASX:DRA) said today that the Mineral Resource for the Kaapelinkulma Gold Project in southern Finland has increased to a total of 183,000 tonnes at an average grade of 4.1 g/t gold for 24,000 ounces. The updated resource followed a recent 4,480 metre infill drilling program. The southern Kaapelinkulma deposit represents a modest shallow, medium to high grade body of gold mineralisation, which has the potential to initially be mined by a small open-cut.

ASX:USA) has completed further targeted drilling at the Blackbush Prospect at the Mullaquana Uranium Project in South Australia. Following the completion of this work, the Inferred Resource of mineralisation at the Blackbush Prospect has been re-estimated and increased from the precious 38.7Mt to current 45.5 million tonnes, containing approximately 12,700 tonnes of U3O8 with a volume weighted average grade of 280 ppm eU3O8. The average thickness of mineralised intersections is 11.71 meters.