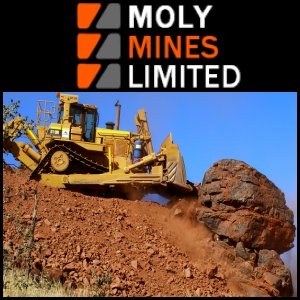 ASX:MOL) has signed an iron ore sales agreement for 100% of its production from the Spinifex Ridge Iron Ore Project with Hanlong Metals Limited, an entity associated with Hanlong Group in Sichuan, China, which owns 55% of Moly Mines Limited. The first shipment of iron ore is planned in December 2010. The mining and processing operations at Spinifex Ridge have been designed to produce 1 million tonnes per annum of direct ship hematite iron ore.

ASX:UEQ) announced that the follow-up diamond drilling at the Nabarlek Joint Venture in the Northern Territory has confirmed the widths and outstanding high uranium grades at the U40 Prospect. Assay results include 6.65m at 2.6% eU3O8 and 6.35m at 1.39% eU3O8. The U40 Prospect is located in the Alligator Rivers Uranium Field, a world-class uranium province which hosts some major uranium deposits. The field's total mineral endowment, including mined resources, exceeds 950Mlbs of U3O8.

ASX:MKO) has commenced a 21 hole reverse circulation drilling program on its Anthill Gold Project in the Eastern Goldfields of Western Australia. The program is expected to take approximately 2 weeks to complete and will focus on previously intersected zones to test continuity of gold mineralisation.