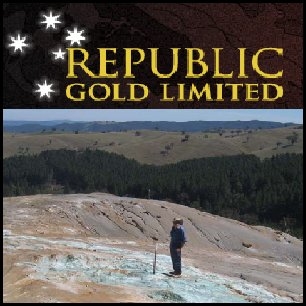 ASX:RAU) today announce that the Company has successfully completed the Bankable Feasibility Study ("BFS") for its Amayapampa Gold Project in Bolivia ("Amayapampa" or the "Project"). In conjunction with the recently signed Social Licence Agreement at the Project, the Company can now advance negotiations to source the necessary development finance for the Project.

The completion of the BFS is one of the most critical milestones achieved by Republic to-date, and represents a major development for shareholders and the Republic team, in both Bolivia and Australia.

"Amayapampa is set to become Bolivia's largest producing gold mine and with a pre-tax net present value estimate of US$340M at current gold prices, the Company is exceptionally well positioned to advance discussions on sourcing project financing to bring the mine into production.

"The BFS has also demonstrated that by the decision to increase the Project's scale, the Company can establish a highly competitive cost base, resulting in an eventual +90,000 ounces of average annual production.

Low cash costs coupled with the low stripping ratio of the planned open pit development strongly supports the economics of the Amayapampa project. With conservative modelling of inputs into the BFS, such as the gold price assumption, the geological block model, operating cost contingencies and metallurgical recoveries, the Company expects that once the plant reaches full production, that there is scope to significantly improve the operating margins outlined in the BFS.

"Once the project reaches production stage, the Company will be in a strong cash position that will be in part used to explore the highly prospective near surrounds to the Project and further afield in Bolivia."

Table 1 (see link at bottom of release), provides the primary outcomes of the BFS. Of note is the high measured and indicated resource to ore reserve conversion, with the open pit taking in 83.5% of these resource categories. In the pit optimisations that were run, areas of the pit floor bottomed out in inferred resource material. The inferred resource of 300,000 ounces is now an immediate focus, with exploration to target an upgrade of this to the higher resource categories.

Another immediate focus is to update the resource block model to include the recent surface trenching work, which should result in an upgrade of the ore reserve.

The result of the metallurgical testwork review indicates that an opportunity exists to further increase metallurgical recovery and therefore further testwork will be undertaken. The overall recovery predicted from the BFS is marginally lower than previously indicated, with the BFS clearly demonstrating a very close correlation between recovery and grade. So as the Project scale increased and the cut-off grade was decreased, the recovery drops marginally with the lower head grade. Some additional testwork is also warranted on the comminution circuit and, if successful, this will lower the capital and operating costs for the crushing and grinding circuit.

There is also scope to reduce the capital cost of the treatment plant and the Company continues to identify local suppliers in Bolivia and other South American countries to do this.

The Company will now proceed to appoint an EPCM engineer for construction. A likely outcome for this appointment is a joint venture arrangement between an Australian and a Bolivian engineering company.

The Project is operating under its Environmental Licence. With the recent signing of the Social Licence agreement, the Project requires no further licensing or permitting.

As part of an Information Memorandum for debt financing to be produced, the Company's debt advisors, CPM Group of New York, will complete a detailed cash flow model. The Project pre-tax NPV's of US$166M at US$925/ounce and US$340M at US$1,200/ounce are indicative only and are both calculated excluding finance charges and are not calculated on a mining schedule but rather on an NPV algorithm available in the mining planning and optimisation software utilised for this BFS. An NPV based upon CPM's detailed cash flow model will be lower than these numbers.

Whilst the BFS was being completed, detailed work on financing the Project continued. The Company's debt advisors, CPM Group of New York, has significantly advanced the Bolivian bond financing concept and will be in La Paz in the third week of August to participate in a number of meetings with various financial intermediaries in the domestic bond market.

In the same week, the Company' equity advisors, Carling Capital Partners of Sydney, will be in La Paz accompanied by the President & Chief Executive Officer of a mid-sized resources investment banking group from Canada.

As part of the due diligence for the BFS the Company commissioned expert advice on the legal proceedings brought against the Project. This advice supports the fact that this litigation has absolutely no merit. The Company's financial advisors do not believe the vexatious litigation will be an impediment to financing the Project.

With the BFS complete, the Project's exploration team will now continue their exploration efforts within the existing concessions. As part of the BFS, a US$5.5M 2-phase near-mine exploration has been scoped out.

Geological mapping of the immediate Project area has been updated in the past few months to assist in targeting the exploration effort. A number of priority targets have been developed over the past months. Those targets are:-

- Continued exploration on the strike of the orebody to the north at Chusquia where the Company recently reported highly encouraging trenching intercepts 600 metres to the north of the open pit of 5 metres at 1.78 g/t Au and 5 metres at 22.4 g/t Au.

- The high grade gold-antimony vein system that runs along a structure to the west of the open pit and extends to the south of the pit for 2-3 kilometres to the villages of Pasuta Pampa and Chojnuma. An exploration programme on this structure is underway, with the exploration team refurbishing a number of old adits that once accessed these veins.

- Continue the refurbishment and sampling of the Luko Grande tin mine approximately 3 kilometres north of the open pit.

- Continue sampling on the major structure that trends north from the open pit for 3 kilometres until it runs out of the Company's present concessions. This fault is highly prospective for gold, tin and zinc, with dozens of old workings stretching along this +3 kilometre fault.

- Explore to the west of the open pit to find the major western bounding fault predicted from the work done by the Company's Consulting Structural Geologist, Dr Steve King.

For the complete Republic Gold announcement including tables and figures, please refer to the following link:
http://www.abnnewswire.net/media/en/docs/63477-ASX-RAU-339794.pdf