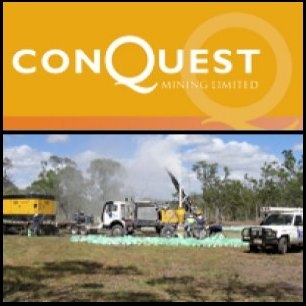 PINK:CQMLF) ("Conquest") announces it intends to make an off-market takeover offer (the "Offer") for all of the shares in North Queensland Metals Limited (

ASX:NQM) ("NQM"). Under the terms of the Offer, Conquest will offer NQM shareholders 0.5 of a Conquest share plus 10 cents cash for every NQM share held, which values NQM at approximately A$58 million or A$0.29 per share*. (*Based on the closing share price of Conquest of A$0.38, as at 2 June 2010, the last trading day prior to the announcement of the Offer)

The Offer represents a substantial and attractive premium of:

- 37% to the volume weighted average price of NQM shares on ASX for the month prior to this announcement.

The major shareholder of NQM is supportive of the Offer and has entered into a pre-bid acceptance agreement with Conquest covering a 19.9% shareholding in NQM.

The Offer provides an opportunity for NQM shareholders to monetise a substantial portion of their value in cash, and is also an opportunity to participate in the potential value of the combined company.

By accepting the Offer, NQM shareholders will become shareholders in a larger, growth oriented company which offers:

- A board with a successful track record of increasing shareholder value

- Exposure to development of the Mt Carlton project - with Ore Reserves of over 1.15 million ounces gold equivalent* (*The gold equivalence calculation represents total metal value for each metal assuming 100% recovery, summed and expressed in equivalent gold grade or ounces. The prices used in the calculation being US$1200/oz Au, US$18.40/oz Ag and US$3.00/lb Cu.)

- A strong platform for growth

Conquest is a growth oriented company that has the focus and ability to deliver a growth plan to achieve mid-tier market status and to take advantage of the benefits available to a company of this status. Conquest will seek to deliver this growth through successful development of its Mt Carlton project and by acting on consolidation opportunities in the relatively fragmented and poorly funded junior market sector.

"The combined company will be better placed to increase the exploration expenditure at Pajingo and attract and retain high quality people. NQM shareholders will benefit initially from the significant up-front offer premium and are expected to benefit over the longer term as value is unlocked by combining the complementary assets and capabilities of Conquest and NQM."

"I believe the combination of Conquest and NQM is very compelling and will deliver value to NQM shareholders more rapidly and far in excess of that achievable by NQM on a stand-alone basis."

If Conquest acquires all of the NQM shares under the Offer, Conquest will have approximately 453 million ordinary shares on issue and former NQM shareholders will own 22% of the combined company.

The Offer will be conditional on Conquest obtaining a relevant interest in at least 90% of NQM shares and on certain other conditions being fulfilled. These conditions are set out in Annexure A to this announcement (see link at the bottom).

Rationale for the Offer

Conquest sees clear benefits from combining the two companies into a larger, more diverse gold mining company. The two companies have complementary assets and skills. The combination of the production base at Pajingo and mining expertise in NQM, and the development project at Mt Carlton and corporate expertise in Conquest, is expected to lead to significant value creation for shareholders.

Benefits of the Offer for NQM Shareholders

By accepting the Offer, NQM shareholders will receive an up-front benefit in the form of a significant and attractive premium being offered by Conquest, and subsequent benefits that will likely become available to all shareholders of the combined company:

A board with a successful track record of increasing shareholder value

Jake Klein was previously President and CEO of Sino Gold Mining Limited where along with Nick Curtis (founder and Chairman until 2005) and Jim Askew (director from 2002 and Chairman from 2005) he managed the development of that company into the largest foreign participant in the Chinese gold industry. Sino Gold was listed on the ASX in 2002 with a market capitalisation of A$100 million and was purchased by Eldorado Gold Corporation (

TSE:ELD) in late 2009 for over A$2 billion. It became an ASX/S&P 100 Company, operating two award-winning gold mines in China.

Exposure to development of the Mt Carlton project

Shareholders of the combined company will be exposed to an entity of greater market scale and liquidity which will likely have an enhanced ability to access debt and capital markets to fund development and acquisition opportunities. Accepting the Offer will allow NQM shareholders to exchange their NQM shares for a more liquid stock. In the year to date over A$44 million of Conquest shares have traded on the ASX compared to just A$8 million of NQM shares. If the Offer is successful, Conquest shares are also likely to attract greater institutional investor attention.

A strong platform for growth

Conquest believes that there is an opportunity in the Australian gold industry to create a genuine mid-tier gold producer with significant production scale and upside. Conquest's long term goal is for it to become an Australian based company with assets that are capable of producing 500,000 ounces per annum. The Offer is the first step by Conquest on its path to realising its goal through organic growth and future acquisitions.

The combined company will have one production asset, a development project and a portfolio of exploration projects across a large landholding in north Queensland. The combined company will have combined Ore Reserves of 1.21 million gold equivalent ounces; 95% contributed by Conquest and 5% contributed by NQM* (*Based on Reserves and Resources as at 31 March 2009 as reported in the NQM Annual Report 2009). Asset diversification is an important business principle that partially mitigates company risk if a key asset experiences production shortfalls. The asset portfolio of the proposed combined company would provide shareholders with a greater risk mitigation opportunity than is present within the existing separate corporate entities.

Further information about the benefits and risk factors relating to the Offer will be set out in Conquest's Bidder's Statement.

The cash component of the Offer, approximately A$20 million, will be funded from Conquest's current cash reserves. At the end of May 2010 Conquest had cash at bank of approximately A$57 million.

Conquest is an Australian based and listed mining company with a focus on activities in north Queensland. The company has a 100% interest in the Mt Carlton gold-silver-copper project, near Townsville, that is being advanced towards development. Work to optimise the project and a review of the proposed process flowsheet is underway.

Conquest is a growth oriented company that has the focus and ability to deliver a growth plan to achieve mid-tier market status and to take advantage of the benefits available to a company of this status. Conquest will seek to deliver this growth through successful development of its Mt Carlton project and by acting on consolidation opportunities in the relatively fragmented and poorly funded junior market sector.

NQM is an Australian based and listed mining company with a focus on activities in north Queensland. The company has a 60% interest in, and is the manager of the Pajingo Gold Mine near Charters Towers. The Pajingo partnership has acquired the former Twin Hills mine for which it has plans to operate as a satellite mine to boost production from Pajingo to over 100,000oz pa. NQM aims to expand its operations and is looking to expand its gold interests in the Drummond Basin.

In addition to its gold operation, NQM has an interest in partnering to develop the Baal Gammon copper/tin mine in the Herberton area. The mineral field includes historic tin and base metal mines with rich credit metals such as silver and indium.

For the complete Conquest Mining announcement including Annexure A, please view the following link: