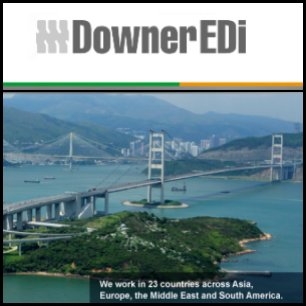 Downer EDI Limited (ASX:DOW) has been contracted to provide telecommunications network design services to NBN Co,
Sydney, May 6, 2010 AEST (ABN Newswire) - Australian shares extended their losses today as the debt issues in Euro zone continued to perplex the global stock markets. The Australian stocks joined the slump in Asian region this morning with a 1.4 per cent fall in S&P/ASX200 index at opening. Japan's Nikkei 225 shed more than 3 per cent in early trade, after the market closed for public holiday for three days.

In economics news on Thursday, the Australian Bureau of Statistics releases the data of international trade in goods and services and retail sales figures, both for March.

ASX:DOW) has been contracted to provide telecommunications network design services to NBN Co, which is charged with rolling out the government's A$42 billion high-speed broadband network, for its First Release Site pilot program. The company says it has been designing and building critical infrastructure for cities and nations around the world for more than a century. The winning of this contract augered well for future opportunities in the growing telecommunications sector.

ASX:DMM) has entered into a conditional Takeover Bid Implementation Deed with Meijin Energy Group Limited for Meijin to acquire all the ordinary shares in DMC at A$0.5 per share in cash through an off-market takeover offer, 8.7 per cent higher than the offer from Cape Lambert Resources Limited (

ASX:CFE) of A$0.46 per DMC share. The Meijin offer values DMC at approximately A$43.4 million.

ASX:SGM) today reported that net profit after tax for the third quarter was A$30.4 million. Sales revenue for the nine months to March 31 were A$5.0 billion, down 31% from a year before, as sales in North America declined 40 per cent. Net profit for the nine-month period was A$70.4 million. But the company says it is seeing significantly improved scrap flows in the fourth quarter, particularly in North America. Sims expects earnings growth in the fourth quarter while global conditions for ferrous and non-ferrous commodities have "generally improved" from the end of the fiscal second quarter.

ASX:NAB) Thursday reported cash earnings for the 2010 half year were A$2.2 billion, a 20.9 per cent increase on the September 2009 half year and an 8.2 per cent increase on the same period a year ago. Robust performances from business banking and MLC & NAB Wealth and an improvement in the bad and doubtful debts charge were key contributors to this earnings growth. The bank's bad and doubtful debt charge fell by 32.1 per cent. But the strong Australian dollar reduced the contribution of offshore earnings to the result.