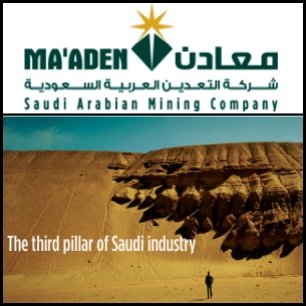 Saudi Arabian Mining Company (SAU:1211) sent WorleyParsons (ASX:WOR) JV an LOI for engineering, procurement and construction management services for the development of a major new world class bauxite mine and alumina refinery in Saudi Arabia.
Sydney, May 3, 2010 AEST (ABN Newswire) - Slump in Australian mining shares dragged the local market lower this morning over worries that a newly unveiled tax on the resources industry could hurt the miners' profits. The drop in local market was also led by the negative lead from US market. Asian stocks also delivered a weak start on Monday. China's central bank on Sunday raised banks' reserve requirement ratio by 50 basis points to further control the property prices. Chinese markets are closed today for Labour Day holiday.

The Australian Industry Group-PricewaterhouseCoopers performance of manufacturing index (PMI) rose 9.3 index points to 59.8 points in April. It was the highest reading for the PMI since May 2002. The result shows that the recovery in the manufacturing sector was gaining traction.

The TD Securities-Melbourne Institute inflation gauge rose by 2.9 per cent in the year to April, the biggest gain in 14 months. It was driven by rising costs for rent, health services and fruit and vegetables.

ASX:WOR) today confirmed that a joint venture between the company and Fluor has received a letter of intent from Saudi Arabian Mining Company (SAU:1211) to provide engineering, procurement and construction management services for the development of a major new world class bauxite mine and alumina refinery in Saudi Arabia.

ASX:ORI) today said it plans to proceed with its demerger of DuluxGroup to create a standalone, ASX-listed company. Orica expects the demerger to occur in July, subject to shareholder and court approvals. Orica chairman Mr Peter Duncan said the company itself is largely as a global leader in mining consumables and services leveraged to mining production volumes, and DuluxGroup as the Australasian market leader in premium branded coatings, home improvement and garden care products. Orica intends to effect the demerger of DuluxGroup through a scheme of arrangement, in which Orica shareholders would receive one DuluxGroup share for every Orica share held and retain their Orica shares. Orica today also reported that net profit fell 75 per cent to A$55.1 million in the six months ended March 31 from A$220.4 million for the first half of last year.

ASX:VBA) said in a statement that they intend to seek regulatory approval to create a tran-Tasman alliance, which will allow the two airlines to strengthen their competitive offering on trans-Tasman and collaborate on future route and product planning, code sharing and frequent flyer program benefits. Applications will be filed with Australian Competition and Consumer Commission and the New Zealand Ministry of Transport with reviews expected around six months. The airlines said the alliance agreement is not a signal of intention by the two to take a shareholding in each other.