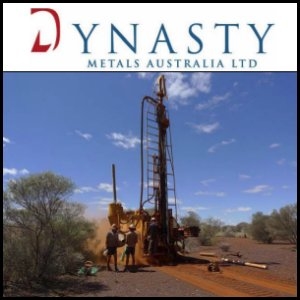 ASX:DMA) is pleased to provide a Quarterly Activities Report for the period ending 31 March 2010.

Mineral Resource estimates are based on 2009 firstpass exploration over less than 1% of Dynasty's Prairie Downs tenements which cover ~3,600km2.

Results confirm the exploration concept of very large tonnages of Detrital and Channel Iron deposits derived from Marra Mamba and Brockman Iron Formations in the ancient river channels that extend many kilometres south & south east of the area drilled to date.

Preliminary sub-optimal test-work show that the in-situ material can be upgraded to commercial grades (58.2% Fe & 9.1% SiO2) with potential for better grades.

The Phase 1 2010 exploration program has been designed to advance Dynasty's understanding of the iron deposits identified during 2009 and to determine if the development of an iron ore project is feasible (i.e. a "Pre-feasibility study").

Reflecting Dynasty's focus on its Pilbara iron ore projects, all non-iron tenements will be transferred into three subsidiaries to facilitate spin-off into separate exploration companies.

Dynasty's flagship Prairie Downs Project is located to the west, south-west and south of Mt Newman. Exploration is focussed on a number of targets within the tenements with the main area drilled to date being at the Spearhole Prospect in the northern portion of E52/1927.

During 2009, Dynasty drilled 300 holes totalling 9,979 metres at its Prairie Downs project. This reconnaissance drilling program cost A$1.2 million and was designed to test geological concepts.

ASX:BHP) Brockman and Marra Mamba Formation deposits to the west and an unnamed Archaean Iron Formation to the east; and

To date, Dynasty has drilled only ~16km2 of its ~3,600km2 Prairie Downs tenement holding.

At the Company's 100%-owned Spearhole Prospect, the initial JORC-Compliant Inferred Resources of 453 million tonnes of Detrital Channel Iron included 129 million tonnes at 30.5% Fe (equivalent to Calcined Fe "CaFe" of 33%) at a cut-off grade of 27% Fe.

Dynasty now has an understanding of the geological controls defining the higher-grade zones within the Detrital Channels. This knowledge is invaluable in assisting accurate drill targeting of these zones in the 2010 program. Further drilling of these high-grade zones within and adjacent to the current resources will be undertaken during 2010, as well as testing the potential continuation of these paleochannels to the south and south-east.

The Spearhole Channel Iron mineralisation improves towards the south and south-east and deepens at the confluence of two channels. Dynasty's drilling and the subsequent resource estimate is in the northern, shallower portion of the deposits identified so far.

Appendix A contains a figure that shows: the location of the iron mineralised zones: (See link at bottom of release).

- illustrates the thickening nature of the deposits; and

- shows large undrilled areas located adjacent to the thicker higher grade areas, which are not included in the resource estimates.

On 16 April 2010, Dynasty announced Board approval of the Phase 1 exploration program at the Prairie Downs Project during 2010. The aim of this A$2.5 million program is to advance the understanding of the iron mineralisation present in the Prairie Downs tenements and to carry out beneficiation studies of the large detrital deposits in this area.

At the Spearhole Prospect, the Phase 1 program is designed to:

- Provide bulk samples for analysis and further beneficiation testwork; and

- Evaluate the continuation of the Spearhole Deposit to the south and south east.

At other Prairie Downs prospects, the Phase 1 program is designed to:

- Identify possible hidden extensions to the Marra Mamba Formation and drill those targets;

- Explore for hidden Brockman Iron Formation which overlies the Marra Mamba Formation; and

The results of the Phase 1 program will be used to define the Phase 2 program.

Work will also commence during Phase 1 on investigations into infrastructure options and the early preparations for environmental and native title clearances required to support any future project development.

Both tests compared analyses of normal samples taken during the Reverse Circulation ("RC") drilling program with analyses of "beneficiated" samples derived from the same drill intervals.

These tests, whilst using sub-optimal material(1) and a sub-optimal process(2), demonstrated that Spearhole Detrital Iron can be beneficiated to near to marketable grades via simple physical processes.

The first test involved processing and beneficiation through a metallurgical laboratory of three bulk (200kg) samples derived from the collection and compositing RC drill cuttings.

The second test compared the analyses of the normal sample taken during RC drilling program with samples derived from the same drill intervals by manually washing, screening and handpicking ferruginous chips.

The results detailed in the above chart clearly show that the manually sorted sample contain significantly more iron and less silica than the assays of the initial RC samples.

These results of both tests demonstrate the upgrade which can be achieved by simple physical processing on sub-optimal material.

Dynasty believes that the Spearhole Detrital Channel Iron Resource at Prairie Downs has a reasonable probability of proving to be economic to mine and beneficiate due to:

Mining costs likely to be low due to:

- Develop projects and required infrastructure either stand-alone or in cooperation with nearby explorers, future producers.

Dynasty is investigating several infrastructure options which include access to existing infrastructure in the Pilbara for its centrally located project at Prairie Downs.

ASX:FMG) which have resulted in access for new iron ore producers. This includes the recent authorisations by the ACCC which granted iron ore juniors the right to negotiate with the major iron ore miners over rail haulage and access rights. Further the State's recent announcement that it has selected Anketell Point near Onslow as the preferred site for a new dedicated 350Mtpa iron ore port is encouraging for Dynasty's Prairie Downs Project and other stranded deposits in the vicinity.

There are a number of deposits west and east of Dynasty's Prairie Downs project which could conceivably add significantly to the economics of using the Onslow port and associated rail access infrastructure to transport iron ore from this region.

Dynasty is in advanced negotiations with several highly respected Chinese parties regarding financing and development support for the Prairie Downs project. The Company continues to review its infrastructure options with existing infrastructure owners and the possibility of participating in new infrastructure projects in conjunction with owners of stranded iron ore deposits in the vicinity of its project in the Pilbara. These negotiations are progressing well.

To ensure the Company remains focused on its Pilbara iron ore projects, the Board has decided to transfer all its non-iron tenements to the following three new wholly owned subsidiaries:

The Board has been in advanced discussion with various brokers which have expressed interest in supporting the spin-off of the above three subsidiaries. It is also the Board's intention to seek additional projects to be injected into the three subsidiaries, and wherever possible and viable to advance each entity to public listing.

On completion of the tenement transfer and securing further tenements as may be appropriate, the Board intends to provide a priority-offer and/or in-specie distribution of the shares in the subsidiaries to Dynasty shareholders at that time, so as to unlock value in these areas for the benefit of shareholders.

On 1 April 2010, Dynasty announced the placement of 10,000,000 shares to sophisticated investors at an issue price of A$0.21 per share, raising A$2.1 million. Patersons acted as Lead Manager to the Placement.

Following completion of the A$2.1 million placement, Dynasty has on issue:

Prior to receiving proceeds from the placement, Dynasty had cash on hand totalling A$1.9 million at 31 March 2010.

(1) Sub-optimal material because the source is drill cuttings which means the in-situ material (iron and silica) has been broken up into smaller fragments during the drilling process and therefore not strictly representative.

(2) Sub-optimal process because any beneficiation or mineral up-grade process takes a long time to properly design, optimize.
Such optimization is only feasible with large samples of at least several tonne.