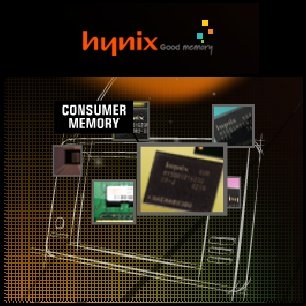 SEO:000660), the world's No. 2 memory chipmaker, posted the highest first quarter earnings in its history with a 2.82 trillion won registered sales. The company posted a 799.1 billion won operating profit on a consolidated basis, compared to an operating loss of 514.6 billion won a year earlier, thanks to strong chip prices.

It is widely expected that DRAM makers will continue to see good profits in the coming quarters as chip prices might remain solid due to strong PC demand and global supply is likely to be tight this year. Japan's Elpida Memory Inc.(

TYO:6665) Wednesday forecasted that it could be back to its first net profit in three years, helped by the rise in memory chips prices. Elpida posted a 178.9 million yen net loss for the previous fiscal year.

But Hynix indicated that the company is cautiously optimistic on outlook for the rest of 2010, given economic uncertainties in global market.