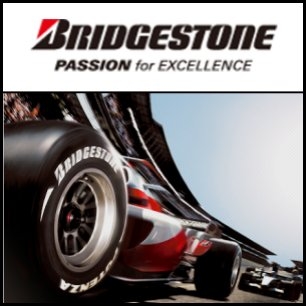 TYO:5108), Japan's largest maker of tyres, said it will invest about 50 billion yen to build its second tire-making plant in western India to cope with growing demand in the emerging market. The new plant will start operations in 2013, with daily production capacity seen reaching 10,000 passenger car radial tyres and 3,000 truck and bus radial tyres at the end of 2020. Bridgestone's first tyre plant in central India has the capacity to roll out 13,000 passenger car tyres a day and will also have capacity to make 400 truck and bus tyres daily by the second half of 2012, the company said.

TYO:6305), Japan's second largest earth-moving equipment maker, said it would spend 22.6 billion yen to make an Indian construction machinery company a unit as it aims to boost sales in the fast-growing market. The company would raise its stake in its joint venture with Tata Motors Ltd (

HKG:3328) on Tuesday reported a 5.6 per cent rise in 2009 net profit to 30.12 billion yuan. This is largely due to a 29 per cent increase in net fee income from its credit-card business, and insurance and wealth-management products. The bank expects the net interest margins will continue to recover from low level in 2009. Bank of Communications plans to slash lending growth to 20 per cent this year and to raise up to 42 billion yuan through a rights issue in Shanghai and Hong Kong. HSBC Holdings PLC (

LON:HSBA), which owns a 19 per cent stake in the Chinese bank, will fully subscribe to the right issue.

SEO:005490) has agreed with its major suppliers to pay US$200 per tonne for its April-June hard coking coal imports, in line with the price Japanese mills concluded earlier this month. The quarterly-based deal prices meant a 55-percent hike from last year's benchmark prices, POSCO said in a statement.