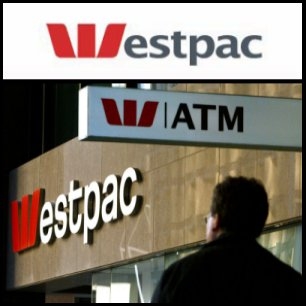 Australian Market Report of February 17: Gained on Encouraging Westpac Earnings
Sydney, Feb 17, 2010 AEST (ABN Newswire) - The Australian sharemarket closed higher Tuesday. Financial stocks were boosted as Westpac's strong earnings result provided a positive sign for the banking sector and Australia's economy. The benchmark S&P/ASX200 index was up 22.3 points, or 0.5 per cent, at 4567.8, while the broader All Ordinaries index gained 20.4 points, or 0.4 per cent, to 4590.8.

The National Australia Bank (NAB) business confidence index gained seven points to plus-15 points in January, compared to an 11-point fall in December. Sentiment was strongest in the manufacturing, finance and business services, and personal and recreation sectors. However, the survey showed that business conditions softened and labour market conditions were broadly unchanged. NAB also expects unemployment to fall to around 4.75 per cent by the end of 2010.

Westpac-Melbourne Institute Indexes of Economic Activity for December is due to release on Wednesday.

ASX:GPG) stating that a wholly owned subsidiary GPG intends to make a new takeover offer of A$0.33 per share for Tandou. The Board of Tandou recommended shareholders take no action until they have received the Target's Statement. The company said directors are unanimous in their belief that the new takeover offer is unattractive as the new offer represents a significant discount to the underlying fundamental value of Tandou shares.

ASX:MAH) Tuesday recorded a A$21.5 million net profit in the six months ended Dec. 31, a 52% rise from A$14.1 million a year earlier. The company saw a significant rebound in the number of tenders for work after the global financial crisis. Macmahon also raised its full-year guidance, expecting a net profit for the fiscal year of between A$36 million and A$40 million - slightly above its November guidance of A$34 million.

ASX:WBC) jumped on Tuesday after it posted a 33 per cent increase in its first quarter cash earnings. Westpac said sash earnings on an unaudited basis were about A$1.6 billion for the three months to December 31, up from A$1.2 billion in the same period a year before. Westpac chief executive Gail Kelly said the improved earnings were a result of a halving in impairment costs and good momentum across all businesses.

ASX:FGL) Chief Executive Ian Johnston said Tuesday the group has not ruled out a potential demerger of its wine and beer divisions while the company continues to evaluate all structural options that are consistent with shareholders' interest. The group's first-half net profit dropped 13.5%, but Fosters says recent performance improvement in key states provides confidence that momentum will build through the balance of the year. Net profit for the half year ended Dec. 31 was of A$355.7 million down from A$411.3 million a year earlier.

ASX:MGR) said net profit for the six months to Dec. 31 was A$47.2 million, up from an A$645.7 million interim net loss last year. The group has upgraded its full year guidance as it squeezed more rental income from its retail and commercial real estate investments.

ASX:SEK) reported net profit for the first half ended Dec. 31 rose 12.6 per cent to A$36.6 million from A$32.5 million a year earlier. Seek also expects a strong second half as its employment advertising division has seen an "encouraging start" to the period.

ASX:OST) posted a 49% drop in first half profit to A$117 million for the period ended Dec. 31, down from A$228 million a year earlier. But the result still came in ahead of market expectations. OneSteel gave guidance for its net profit in the second half to be broadly in line with the first half.

ASX:MND) delivered a net profit for the six months to December 31, 2009 of A$40.5 million on sales revenue of A$619.5 million, both up 10 per cent on the previous corresponding period. The company said it had begun to focus on capacity expansion.