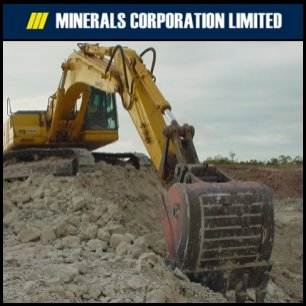 Minerals Corporation Limited ( ASX:MSC) signed an MOU with Zhejiang Dadongwu Group (DDW), a "Top 500" Chinese company, to supply its low carbon cement products to the greater Shanghai region in China.
Sydney, Jan 13, 2010 AEST (ABN Newswire) - Australian stocks declined yesterday on profit taking selling after US aluminium giant Alcoa reported its fourth quarter earnings result, which missed the market expectations. The resources sector drove the local shares lower. The benchmark S&P/ASX200 index closed down 51.2 points, or 1.03 per cent, at 4,899.5 points, while the broader All Ordinaries index lost 49.6 points, or one per cent, to 4,931.6 points.

Australia's housing finance commitments for owner-occupied housing fell 5.6 per cent in November, seasonally adjusted, to 59,516, the Australian Bureau of Statistics said. It was the second successive monthly fall as first home buyers left the property market after the central bank increase interest rates and the government lowered the first home buyers grant. The median market forecast was for housing finance commitments to have fallen 0.5 per cent in November.

ASX:CSR) for cash, sending shares of the Australian firm sharply higher on Tuesday. Chinese state-owned food producer said it has approached CSR about acquiring its sugar and renewable energy business for up to A$1.5 billion. The Australian company described Bright Food Group's statement as "merely an expression of interest and does not make any proposal capable of acceptance by CSR".

ASX:NMS) said it has been contracted to provide diving, survey and vessel support services on Chevron Australia's Gorgon LNG project in Western Australia. Managing director Christian Lange said the initial scope of work was very encouraging and offered the potential for further opportunities on what is Australia's largest resources development project.

ASX:MSC) signed an MOU with Zhejiang Dadongwu Group (DDW), a "Top 500" Chinese company, to supply its low carbon cement products to the greater Shanghai region in China. Subsequent to product testing by the parties in Australia and Shanghai in Q4 2009 and January 2010, a bulk production run is scheduled for later this month using the DDW blending facilities.

ASX:GUD) said it expects the EBIT for the first half of 2010 fiscal year to be more than 10 per cent above the prior corresponding period. Based on trading to date, expectations are that full year underlying EBIT, before significant items, will be in the range A$64-68 million, provided that there are no adverse exchange rate, input cost or selling price movements.

ASX:LEI) said on Tuesday that its wholly owned subsidiary John Holland has secured a 30 month mine operations contract to deliver works at Isaac Plains Coal Mine in Central Queensland, owned by a 50:50 joint venture between Vale (

ASX:AQA). The contract is valued at approximately A$260 million.