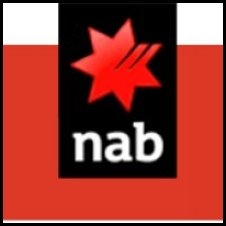 National Australia Bank (ASX:NAB) said today it agreed to acquire Hong Kong-based Calibre Asset Management for an undisclosed amount. The boutique advisory firm will boost NAB's offering in Hong Kong where the Australian lender specializes in local and overseas property portfolios, term deposits and foreign currency needs, NAB said in a statement. NAB's acquisition in Hong Kong is closer to A$5 million, a person familiar with the deal said.
Sydney, Nov 18, 2009 AEST (ABN Newswire) - Wall Street closed slightly higher overnight on a round of buying in energy and materials companies. But more stocks fell than rose as retailers such as Target and Home Depot's disappointing holiday spending outlooks raised concerns over the strength of recovery.

Australian shares opened in a positive territory after stronger oil and copper prices. Yesterday the Australian market retreated after some profit taking selling. The benchmark S&P/ASX200 index fell declined points, or 0.54 per cent, to 4729.4, while the broader All Ordinaries index shed 23.6 points, or 0.49 per cent, to 4750.2.

The Aussie dollar opened lower this morning, trading at US$0.9290/91 at the opening. The unit was under pressure after RBA's board meeting minutes released yesterday said the pace of the cash rate adjustment remained an open question.

The Reserve Bank says in the minutes of its board meeting that further interest rate rises are "most likely appropriate", if economic conditions continue to evolve expected. The central bank on November 3 raised the cash interest rate by 25 basis points higher to 3.5 per cent. But RBA failed to confirm the pace of the adjustment in its minutes.

Today Westpac and the Melbourne Institute release their Indexes of Economic Activity for September. The Australian Bureau of Statistics releases its labour price index for September quarter and international merchandise imports for October.

AED Oil (ASX:AED) said today that it has signed a Letter of Intent with Nations Petroleum Co to acquire its subsidiary which holds a 50 per cent operating interest in the Brunei Block L oil and gas permit. AED will pay Nations US$3 million cash and issue 24 million new AED shares. Nations will end up with a 14.5 per cent holding in the company at the deal's completion.

AWB Ltd (ASX:AWB) reported a net loss of A$250.82 million for the year to September 30 2009, as the grains marketing company took write-downs for discontinued businesses and charges for restructuring and legal costs. AWB booked a profit of A$60.27 million in 2008. The company declared no final dividend. AWB is forecasting a 2010 profit before tax and significant items for its continuing businesses of A$95 million - A$115 million.

Mining company Perilya (ASX:PEM) said it would undertake a A$55 million one-for-three rights issue at A42 cents. The miner will use the proceeds for some of its projects in various stages of progress. Perilyas controlling shareholder, Chinas Zhongjin, will subscribe for its full entitlement of about 65.9 million shares, more than half the shares to be issued.

Cortona Resources (ASX:CRC) will make a A$10.3 million capital raising comprising a A$2.5 million institutional share placement and fully underwritten A$7.8 million rights issue to accelerate the development of its Dargues Reef gold project in New South Wales.