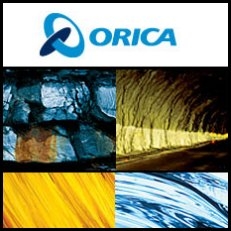 Chemicals maker Orica Limited (ASX:ORI) on Monday posted a net profit of A$541.8 million for the year ended September 30, up A$2.2 million on the prior year. The company also expects a continued growth in 2010. Orica declared a final dividend of 57 cents, 20 cents fully franked, up from 55 cents in the prior year.
Sydney, Nov 9, 2009 AEST (ABN Newswire) - Wall Street posted a small gain on Friday despite the Labour Department report showed the US unemployment rate broke above 10 per cent in October, up from 9.8 per cent in September. But the number of jobs lost narrowed to the lowest level in more than a year.

The Australian share market opened higher after Wall Street's gains, along with stronger gold prices. On Friday the local market was buoyed by a more optimistic assessment of the economy by the RBA. The benchmark S&P/ASX200 index closed 1.91 per cent higher, settled at 4594.04, while the broader All Ordinaries index rose 85.2 points, or 1.89 per cent, to 4604.4.

The Olivier job index, which measures online job ad demand and interest, dropped 1.67 per cent in October, following two month's gains. Later this week, official unemployment data will be released, with analysts expecting to the jobless rate to have risen to 5.8 per cent in October.

The new OECD (Organization for Economic Co-operation and Development) figure shows that food prices in Australia have increased 41.3 per cent since the start of 2000. Spain has the next fastest rate of increase over that time at 41.2 per cent. The UK is next at 32.9 per cent, Canada 32.7 per cent, Italy (29.7 per cent) and US (28.4 per cent).

The Australian Bureau of Statistics is due to publish housing finance data for September today. ANZ will release its job advertisements survey for October.

Rocklands Richfield Limited (ASX:RCI) on 5 November announced that RCI had received an unsolicited conditional offer from China's Meijin Energy Group to acquire RCI at A$0.52 per share, superior to the offer price of A$0.42 per share by Jindal Steel & Power Limited (BOM:532286). Today RCI said it received a revised proposal from Jindal, and its current view is that the Meijin proposal remains superior.

AXA Asia Pacific Holdings (ASX:AXA) has rejected a takeover proposal from AMP (ASX:AMP) working with AXA's French parent, AXA SA. AXA APH received the unsolicited and conditional scheme proposal from AMP and AXA SA on November 7. AMP had agreed with AXA SA to acquire off-market all of the 53 per cent of AXA APH now held by the French parent.

Commonwealth Bank of Australia (ASX:CBA) says cash earnings for the September quarter was A$1.4 billion, following good income growth and continued costs management. Its impairment expense charge was about A$700 million for the three months ended September 30, with credit quality trends generally moving in line with expectations.

Chemicals maker Orica Limited (ASX:ORI) on Monday posted a net profit of A$541.8 million for the year ended September 30, up A$2.2 million on the prior year. The company also expects a continued growth in 2010. Orica declared a final dividend of 57 cents, 20 cents fully franked, up from 55 cents in the prior year.

Fairfax Media (ASX:FXJ) director David Evans has been forced to resign from the board after a ruling from the Australian Communications and Media Authority (ACMA), the company said. Mr Evans said the ACMA determined that he could not serve on both the Fairfax Media and Village Roadshow Ltd (ASX:VRL) boards, because Village has a substantial shareholding in Austereo (ASX:AEO), which owns radio licences in some areas which overlap with radio licences held by Fairfax.