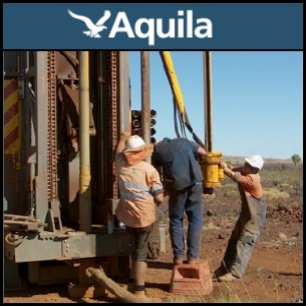 Australia's Foreign Investment Review Board (FIRB) has asked Baosteel Group Corp., China's biggest steelmaker, to resubmit its application to take a stake in junior coal and iron ore group Aquila Resources Ltd. (ASX:AQA). Baosteel plans to invest up to A$285.6 million in Aquila to earn a stake of up to 15 per cent.
Sydney, Oct 8, 2009 AEST (ABN Newswire) - VIDEO: Wall Street closed flat yesterday after the market rallied for two days. Traders turned cautious before the third quarter earnings kick off. Alcoa (NYSE:AA), the first company to unveil its earnings, posted a better-than-expected result with third quarter net income of US$77 million, after three consecutive quarters of losses.

The number of housing-finance approvals in Australia fell 0.6%, seasonally adjusted, in August from July, the Bureau of Statistics said. Economists on average had expected a fall of 1.0% in August.

The Australian Bureau of Statistic releases labour force data for September on Thursday.

It is reported that US private equity firm Oaktree Capital Management and local developer Grocon have made a friendly bid for the debt-laden Multiplex Prime Property Fund (ASX:MAFCA), with a A$109 million cash and hybrid security offer. The move by the consortium would result in Grocon taking over the management of the Multiplex Prime.

Australia's Foreign Investment Review Board (FIRB) has asked Baosteel Group Corp., China's biggest steelmaker, to resubmit its application to take a stake in junior coal and iron ore group Aquila Resources Ltd. (ASX:AQA). Baosteel plans to invest up to A$285.6 million in Aquila to earn a stake of up to 15 per cent.

Westpac (ASX:WBC) has lost a New Zealand High Court case against the NZ tax office, leaving it facing a bill of NZ$961 million in taxes and interest. New Zealand's Inland Revenue (IRD) disputed tax on nine structured finance transactions by Westpac between 1998 and 2002. Other major Australian banks also undertook similar transactions before new regulations were introduced by the New Zealand government to close the loophole.

Sigma Pharmaceuticals (ASX:SIP) said its retail share entitlement offer fell short of expectations. The company had expected to raise A$297 million through institutional and retail share offers to fund an acquisition and future growth. Sigma Pharmaceuticals has called a trading halt pending a book build process for new securities not taken up under the retail entitlement offer.

Alumina Ltd. (ASX:AWC) said it is seeing early improvements in demand and prices for alumina, after its joint venture partner Alcoa Inc. (NYSE:AA) posted its third quarter results which has returned to profit. Alcoa and Alumina have cut back production at higher cost operations to lower their operating costs.

Transfield Services Ltd (ASX:TSE) reports its US oil and gas maintenance specialist company, TIMEC, has renewed its long-term agreement with energy producer Chevron in the US for a further five years. Average revenue from the contract over the last three years was about A$50 million a year.

Westgold Resources (ASX:WGR) has completed a placement of 55 million shares to institutional and sophisticated investors at an issue price of A$0.40 each to raise A$22 million before costs. Metals X Ltd (ASX:MLX) has confirmed that it will take part in the Placement to maintain its current stake at 29.6 per cent. 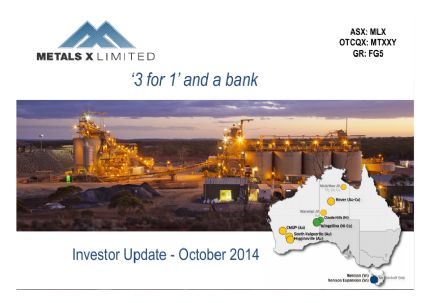