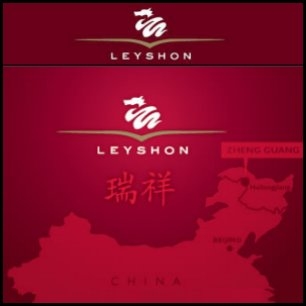 Leyshon Resources Limited (ASX:LRL) and its joint venture partner have entered into a conditional agreement to sell their respective interests in the Black Dragon Mining Company, which owns the Zheng Guang Project, to Heilongjiang Heilong Mining Company. Heilong will pay RMB230 million for 70% interest in Leyshon's wholly own subsidiary China Metals Pty Limited.
Sydney, Sep 22, 2009 AEST (ABN Newswire) - Wall Street closed mixed on Monday ahead of the Federal Reserve's monetary policy meeting. The Federal Reserve is widely expected to leave the near-zero interest rate unchanged, but may begin scaling back some economic stimulus. Traders moved into technology and health care shares amid concerns the energy, materials and financials were overbought.

The Australian share market yesterday ended slightly lower as investors locked in profits from previous rises. The benchmark S&P/ASX200 index fell 15.8 points, or 0.34 per cent, to 4677.4, while the broader All Ordinaries index lost 9.6 points, or 0.2 per cent, at 4684.1.

Sales of new motor vehicles in Australia rose by 0.3 per cent, seasonally adjusted, to 75,388 units in August, according to the Australian Bureau of Statistics (ABS). This compares to a 6.9 per cent drop in total vehicle sales, to 75,133 units, in July. The result reflected signs of stronger consumer confidence.

Leyshon Resources Limited (ASX:LRL) and its joint venture partner have entered into a conditional agreement to sell their respective interests in the Black Dragon Mining Company, which owns the Zheng Guang Project, to Heilongjiang Heilong Mining Company. Heilong will pay RMB230 million for 70% interest in Leyshon's wholly own subsidiary China Metals Pty Limited.

Junior telco SP Telemedia (ASX:SOT), which trades under the names SOUL and TPG, posted an annual profit exceeded guidance. Net profit for the year to July 31 was A$17.7 million, up from a net loss of A$18.9 million in the previous year. The company also forecasts a strong profit growth to continue.

Asciano Group (ASX:AIO) still expects this financial year to be tough but says the outlook for the 2010-11 financial year is very positive. Asciano expects its key bulk handling and haulage businesses will continue to perform well in the current financial year, with sustained strong demand expected to underpin growth in coal volumes from NSW's Hunter Valley. Asciano booked an annual net loss after significant items for 2008-09 of A$244.1 million, compared to a loss of A$181.5 million in the prior year.

Lion Nathan (ASX:LNN) has won a deal with the world's largest brewer Anheuser-Busch InBev to distribute and market US lager Budweiser in Australia and New Zealand. Lion Nathan said InBev's A$79 million takeover of Anheuser-Busch in November 2008 was a key factor in Lion making the deal, as Lion distributed Belgian brewer InBev's Becks brand nationally since 2001 and brewed it locally since 2004.

New Hope Corp (ASX:NHC) reported an 82% increase in net profit after tax from its coal mining, port and other operations to A$150.5 million for the year to July 31, 2009. New Hope also reported a non regular net profit after tax of A$1.688 billion as a result of the sale of its New Saraji project to BHP Billiton (ASX:BHP) Mitsubishi Alliance.