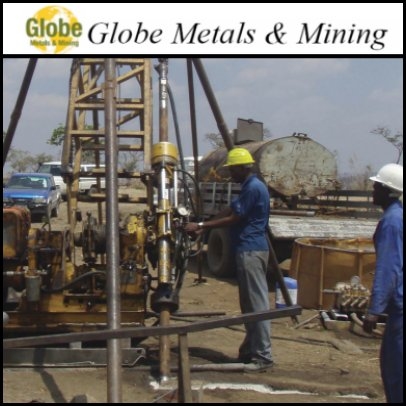 Globe Metals & Mining (ASX:GBE) announced an Exploration Target for its Kanyika Niobium Project in central Malawi. An Exploration Target for the Kanyika Niobium Deposit of 100-110Mt with a higher grade component of 2,900 - 3,200ppm Nb2O5 has been established by the Company's experienced geological team with a possible mine-life in the order of 40+ years.
Sydney, Sep 2, 2009 AEST (ABN Newswire) - Wall Street fell for a third session despite a positive manufacturing data in August. The sell-off was caused by concerns over banks' outlook and fears about September, which was historically one of the market's weakest months.

In Australia market, banks helped to lift the Australian stocks after central bank announced the official interest rate on hold yesterday. The benchmark S&P/ASX 200 index gained 35.5 points, or 0.8 per cent, at 4514.6. The broader All Ordinaries rose 27.2 points, or 0.6 per cent, at 4511.3.

The Reserve Bank of Australia (RBA) left cash rate at 3.0% for a fifth month and said the board will continue to adjust monetary policy so as to foster sustainable growth in economic activity and inflation consistent with the target. RBA did not give guidance on the possible timing of a rate increase. The market is widely expecting a pre-Christmas rate rise is possible if the good economic news continues.

The Australian Bureau of Statistics data showed that total building approvals in Australia rose a seasonally adjusted 7.7% month-on-month in July.

Nexus Energy Ltd. (ASX:NXS) would raise capital for its Longtom project, offshore Victoria state, as a project delay and a cost blowout in the construction had led to a review of the Bank of Scotland financing facility. Nexus Energy said the delay to the completion of the Longtom project will result in certain conditions required under the sale to AED Oil (ASX:BGD) of a 50 percent stake in the gas project for A$155 million. Nexus had planned to pay down project debt with money from the AED transaction.

Globe Metals & Mining (ASX:GBE) announced an Exploration Target for its Kanyika Niobium Project in central Malawi. An Exploration Target for the Kanyika Niobium Deposit of 100-110Mt with a higher grade component of 2,900 - 3,200ppm Nb2O5 has been established by the Company's experienced geological team with a possible mine-life in the order of 40+ years.

CSR Limited (ASX:CSR) flagged that it is unlikely a foreign player will take a cornerstone investment in its sugar business, which will be spun off into a separate entity rather than be sold to a trade buyer. CSR will unveil more details about the proposed companies when it posts the half-year results announcement in early November.

It is reported that Boulder Steel (ASX:BGD) is planning to build a $US2 billion plant with a member of the Saudi Arabian royal family at the port town of Gladstone in Queensland. Boulder is looking to finalize a US$800 million, 2.1 million-ton-a-year plant at Gladstone by the third quarter of next year, and a second US$800 million investment to boost the capacity to 5 million tons a year. The financing will probably come from the Middle East.

Shares in Babcock & Brown Infrastructure Group (ASX:BBI) have been placed in a trading halt today pending an announcement about a possible equity injection. It was in talks about bringing in a potential cornerstone investor to help relieve its plight.