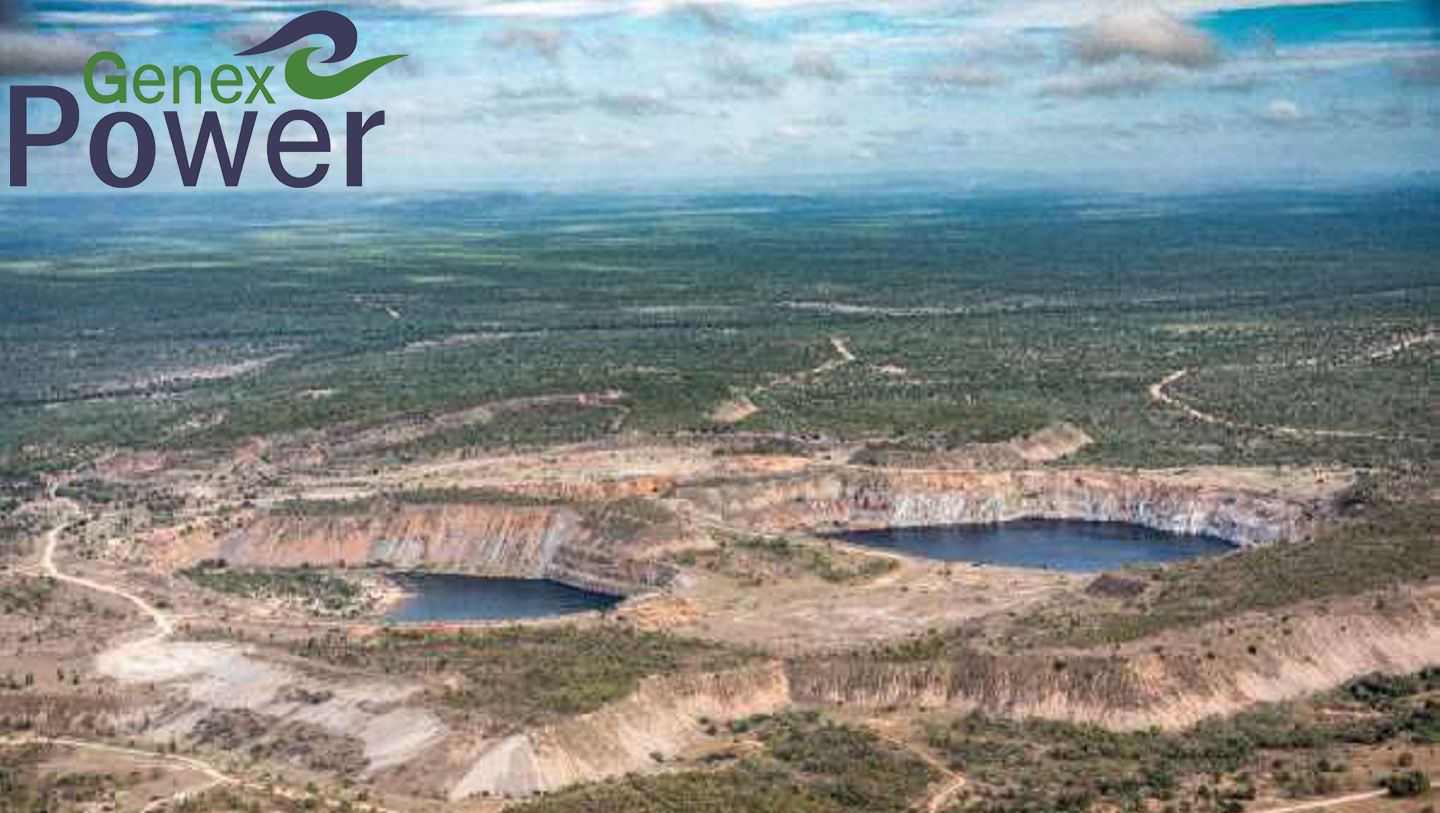 ASX:GNX) is pleased to provide the following update on the Company's activities and performance for the quarter ending 31 March 2021 (Q3 FY2021), a period during which the Company made substantial progress with its Kidston Pumped Storage Hydro Project (K2-Hydro), having successfully raised additional funds to retain 100% ownership of the Project and reached Project Document Contractual Close.

- Subsequent to completion of the capital raising, Genex will be fully funded for the construction of K2-Hydro with financial close and commencement of construction to occur in early Q4 FY2021;

- The Queensland Government confirmed its support for the construction of a 275kV transmission line to connect the K2-Hydro project to the National Electricity Market (NEM) by way of a $147 million funding package;

- Project Document Contractual Close reached for K2-Hydro with all major project agreements executed, and notice to proceed issued to Powerlink for construction of the Transmission Line;

- $47 million in grant funding for K2-Hydro approved by the Australian Renewable Energy Agency (ARENA), with a further $9 million of existing funding to be converted into a non-recoupable grant;

- 50MW Kidston Solar Project (KS1) delivered $3.5 million in net revenue and 30,261MWh of power generated for the quarter; and

Commenting on the Q3 FY2021 performance Genex CEO, James Harding said: "Our flagship project, the Kidston Pumped Hydro Project, is now only weeks away from financial close and commencement of construction. Over the past quarter we have secured additional funding from the Queensland Government and ARENA, and we also made the decision to raise $115 million in new equity to allow Genex to retain 100% ownership in the project. With the strong support of our financiers and shareholders, we now have the full funding in place to bring the project to financial close.

I would like to take the opportunity to thank all of our key stakeholders, and both existing and new shareholders for their continued commitment and support which is turning our vision of a pumped hydro project at Kidston into reality. I look forward to updating you as we commence the construction activities at site."

- The Queensland Government confirmed it will provide $147 million in funding towards the construction of a new 275kV transmission line which is required to enable the K2-Hydro project to connect to the NEM, ultimately underpinning the development of the broader Kidston Clean Energy Hub (refer to ASX Announcement dated 5th February 2021);

- Project Document Contractual Close was reached during the period, signalled by the execution of the following major construction and operation documentation (refer to ASX Announcement dated 31st March 2021):

- Approval from the Australian Renewable Energy Agency (ARENA) to provide $47 million in grant funding. A further $9 million in previously provided development funding to be converted into a non-recoupable grant on financial close (refer to ASX Announcement dated 24th March 2021);

- Launch of a fully underwritten $90 million placement and rights issue to fund the balance of the equity requirement for the K2-Hydro project;

- Following the completion of the fundraising and J-POWER subscription, Genex will proceed with the construction and operation of the Project on a 100% owned basis. 50MW Kidston Solar Project (KS1):

- KS1 continued to generate energy into the NEM throughout the quarter;

- As previously advised (refer to ASX Announcement dated 21 October 2020), Genex and UGL mutually agreed to end UGL's role as EPC Contractor and O&M provider to the Company's KS1 project. Genex has completed contractual terms with Solarig Australia Pty Ltd (Solarig) and as such, Solarig have been appointed as the replacement O&M provider for KS1. As of 14th April 2021, the O&M role at KS1 was transferred from UGL to Solarig.

- Following the successful energisation in Q2 FY2021, JSP is now the second generating asset in the Genex renewable energy portfolio;

- The Project will initially operate on a merchant basis, with the Company receiving the spot price for electricity in addition to revenue from the sale of Large-Scale Generation Certificates;

- JSP is currently in the commissioning phase and is completing the hold point testing required to allow the project to ramp up to full generation capacity; and

- When fully operational, JSP is expected to produce up to 128,700MWh of energy per year. Bouldercombe Battery Project (BBP):

- The BBP is a standalone large-scale Battery Energy Storage System (BESS) in Queensland at an initial size of 50MW;

- During the period, the Development Application relating to the BBP was approved by the Rockhampton Regional Council, allowing for a BESS development sized up to 100MW/200MWh;

- Further grid connection, module supply and financing workstreams have continued to progress during the quarter with the target of bringing the project to financial close in CY2021; and

- The BBP diversifies the Company's portfolio and positions Genex as a leader in renewable energy generation and storage in Australia.

- Alongside its joint venture partner, J-POWER, Genex continues to monitor the wind resource at a number of potential sites for K3-Wind at Kidston. The Project will connect into the new 275kV transmission line being constructed by Powerlink Queensland for the K2-Hydro project.

- Subsequent to the end of the period, Genex reached Finance Document Contractual Close (FD Contractual Close) for the K2-Hydro project (refer to ASX Announcement dated 15 April 2021). This involved execution of final documentation to secure a total of $660 million of external financing for the project construction costs:

o A variation deed to the Loan Note Subscription with the Clean Energy Finance Corporation to provide a further $3 million of subordinated debt funding to be applied toward the project costs.

- Genex successfully completed the capital raise to fund Genex's equity contribution for 100% ownership of the K2-Hydro project. A total of 451,400,000 shares were issued at an issue price of $0.20 per share, raising $90.3 million (before costs).

- To finance the K2-Hydro project on a 100% owned basis, Genex launched a fully underwritten $90 million placement and rights issue;

- Genex finished the quarter with a strong cash position, with cash at bank of $39.1 million (which includes funds held for construction of Jemalong and bank guarantees) at 31 March 2021;

- During the March quarter, the Company's expenditure was primarily incurred through development activities associated with the K2-Hydro & BBP as well as interest repayments to the KS1 and JSP debt facility; and

- As noted in section 6 of the Appendix 4C*, the payment amount stated therein was made to the Directors of the entity during the quarter, comprising salaries and fees for Executive and Non-Executive Directors. No other payments were made to any related parties or their associates of the entity. 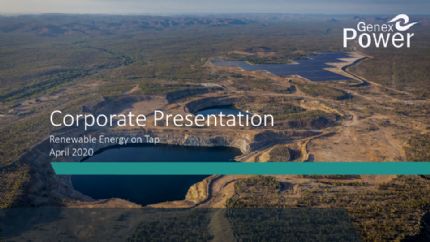 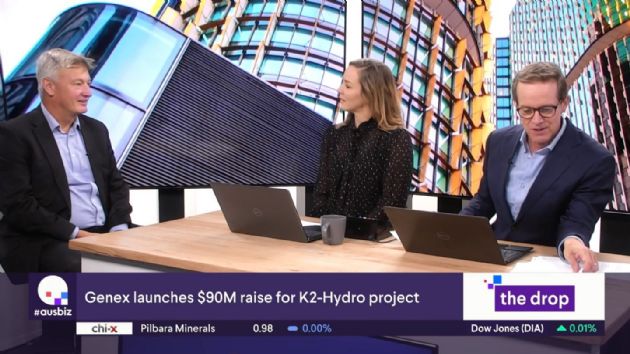