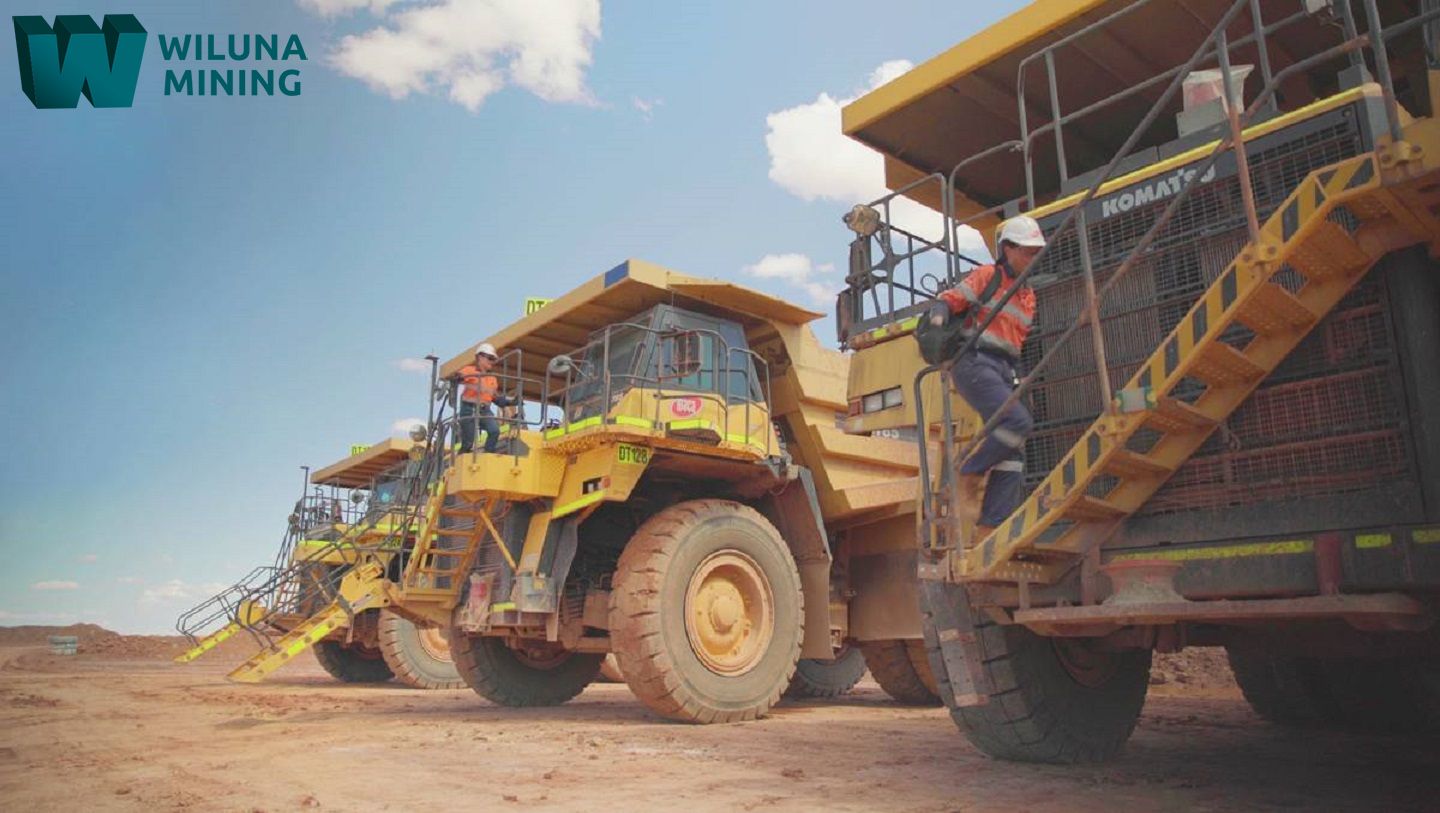 OTCMKTS:WMXCF) is pleased to provide an update on further wide, high-grade intersections from an additional 63 holes and 14,644m of drilling at the Wiluna Mining Centre.

The Company has currently deployed seven rigs in a major resource development and discovery program, which focuses on highest-value deposits scheduled for mining in the next five years to further enhance the mine plan. Results reported here are from Bulletin, West Lode South and the emerging Essex and Starlight high grade shoot discoveries.

In addition, high grades encountered in grade control drilling at Golden Age are expected to materially enhance grade and production during the transition to, and in parallel with, the addition of sulphide production in the three-year staged development at the Wiluna Mining Centre.

Wiluna Mining's drilling strategy in the past 12 months has successfully grown the Mineral Resource at the Wiluna Mining Centre to 4.24Moz @ 4.89g/t (>2.5g/t cut-off, see ASX release 5 November 2020). The program continues to define wide high-grade intervals at shallow levels, close to multiple previously mined zones with existing access for rapid low-cost development (Figure 1*).
The new discoveries at Starlight and Essex demonstrate the outstanding discovery potential at Wiluna, where despite over 125 years of mining and exploration, new high-grade discoveries continue to be made, close to surface and close to existing underground mine infrastructure. These results confirm the Company's strong view that the Wiluna Operation will develop into a larger-scale, high grade, and long-life gold mine.

Drilling at the Starlight zone in the Wiluna North Mine area has delivered exceptional results (Figure 1 & 2*), with wide, high grade sulphides intersected at shallow depths below the Starlight pit, which the Company completed mining of oxide and transitional ore in 2020. The new discovery at the Starlight zone is significant in that it is located only 200m away from the existing underground mine development activities and could be rapidly brought into production at low capital cost if further planned drill testing demonstrates economic reserves.

The ongoing program at Essex, which is a high grade, high-priority mining zone in the Wiluna Central Mine area, continues to generate excellent results. The success of the Company's drilling and resource development activity and the new discovery at Essex validates the Company's strategy to focus on shallow, high-grade sulphide ore bodies for development early in the mine plan.

Recent drilling has intersected high grade visible gold in stacked lodes parallel to and down plunge of the main Essex lode, which was mined by open pit in 2020 (Figure 3*).

WURD0109 intersected visible gold mineralisation, which is reflected in the high-grade assays of 1.13m @ 11.03g/t, and 2.45m @ 31.30g/t. This result follows up previously released intersections, including WURD0112 (8.00m @ 5.31g/t and 8.00m @ 15.20g/t, see ASX release dated 27 January 2020). Further drilling is planned to complete the infill of this highgrade lode discovery with a view to defining an ore reserve to enhance the front end of the underground mine plan at the Wiluna Mining Centre.

The program at West Lode South, which is a high-priority target in the Wiluna South Mine Area owing to its proximity to surface and existing decline access that is now being dewatered to install underground drilling positions, continues to generate excellent results. West Lode South has the potential to add to mine life and improve the head grade based on the thick high-grade mineralisation intersected in the current program and Wiluna Mining's previous holes (Figure 4, and ASX release 27 January 2021).

West Lode was historically mined via underground between 1932 and 1946 and produced 691,000oz @ 8.6g/t, which demonstrates the scale and high-grade nature of this target zone. West Lode remains open and sparsely drilled in the southern target area (Figure 4), with potential to delineate resource extensions and to make a new shoot discovery.

Golden Age currently supplements the baseload free-milling feed from Williamson pit stockpiles and is an important source of transitional cashflow for the next 12 months and beyond. Golden Age will also continue to provide mill feed with the ability to produce gold dore and gold concentrates following commissioning of the sulphide concentrator.

Gold dore produced on site in parallel to concentrate sales will be continued to improve and optimise operating margins.

Grade control and extensional drilling at Golden Age has intersected exceptionally high-tenor mineralisation that is likely to materially improve free-milling production over the coming months. Further resource extensional drilling is planned as the high-grade mineralisation remains open for a considerable distance along strike and down-plunge of the current workings.

Indeed, these exceptional results suggest the tenor of mineralisation improves to the East and at depth (Figure 5).

Following the 93,000m of resource and reserve development drilling completed in 2020, the Wiluna Mining Centre Mineral Resource Estimate has increased to 60.2Mt @ 2.99g/t for 5.78Moz (above 1.0g/t cut-off), including a high-grade component of 26.9Mt @ 4.89g/t for 4.24Moz above 2.5g/t cut-off (see ASX release dated 5 November 2020). Approximately 50% of the Mineral Resource is in the Measured and Indicated categories and 50% in the Inferred category. The 2021 drilling program is of similar scale, with seven rigs currently operating, with the aim to grow reserves through targeting new high-grade shoots and progressive infill to convert the current Inferred Resource of 2.10Moz @ 4.57g/t (above 2.5g/t cut-off) to Indicated category. The Company will publish initial Sulphide Ore Reserves in the first quarter of 2021.

Including historical production of over 4Moz, Wiluna's total endowment is over 10Moz which ranks Wiluna alongside an exclusive peer group of large-scale, long-life mining centres in the Western Australian gold fields. Most historical production and existing resources occur in the upper 600m at Wiluna, with limited drilling during the past 15 years at depth on Wiluna Mining's exploration targets (Figure 1), which Wiluna Mining will systematically drill out to complete the resource and reserve development program over the next three to five years.

At Wiluna, the bulk of the ounces are hosted within high grade shoots within steeply dipping gold shear zones, with the two most prominent shears being the East and West structures and a third sub-parallel structure called Adelaide-Moonlight shear, with a combined strike length of over 10km. In addition, numerous linking structures and splays are also mineralised, and free-milling high grade quartz reefs continue to be drilled at the Golden Age area.

The lodes that comprise the two main structures within the Wiluna deposit have very limited drilling below the deepest levels of production (600m to 1,000m below surface), but the drilling that has been completed shows the same mineralisation style at similar grade and width as observed within the past production envelopes. This gives confidence that mineralisation extends well beneath the currently known extents of each lode. Prior to Wiluna Mining's ownership, a limited number of historical intercepts drilled over 1,000m below surface confirmed that high grade extensions continue below the deepest mine workings.

The Company is targeting high grade zones to bring into the front of the mine plan, because every increase in head grade of 1g/t equates to approximately an additional 50kozpa once the production is fully ramped up at the conclusion of the staged three-year development plan.

*To view the full release, including tables and figures, please visit:
https://abnnewswire.net/lnk/WW1Q6L9C

Wiluna Mining Corporation (ASX:WMC) (OTCMKTS:WMXCF)  is a Perth based, ASX listed gold mining company that controls over 1,600 square kilometres of the Yilgarn Craton in the Northern Goldfields of WA. The Yilgarn Craton has a historic and current gold endowment of over 380 million ounces, making it one of most prolific gold regions in the world. The Company owns 100% of the Wiluna Gold Operation which has a defined resource of 8.04M oz at 1.67 g/t au. In May 2019, a new highly skilled management team took control of the Company with a clear plan to leverage the Wiluna Gold Operation's multi-million-ounce potential. 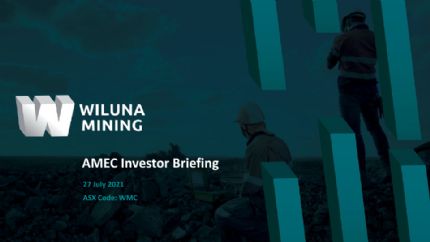